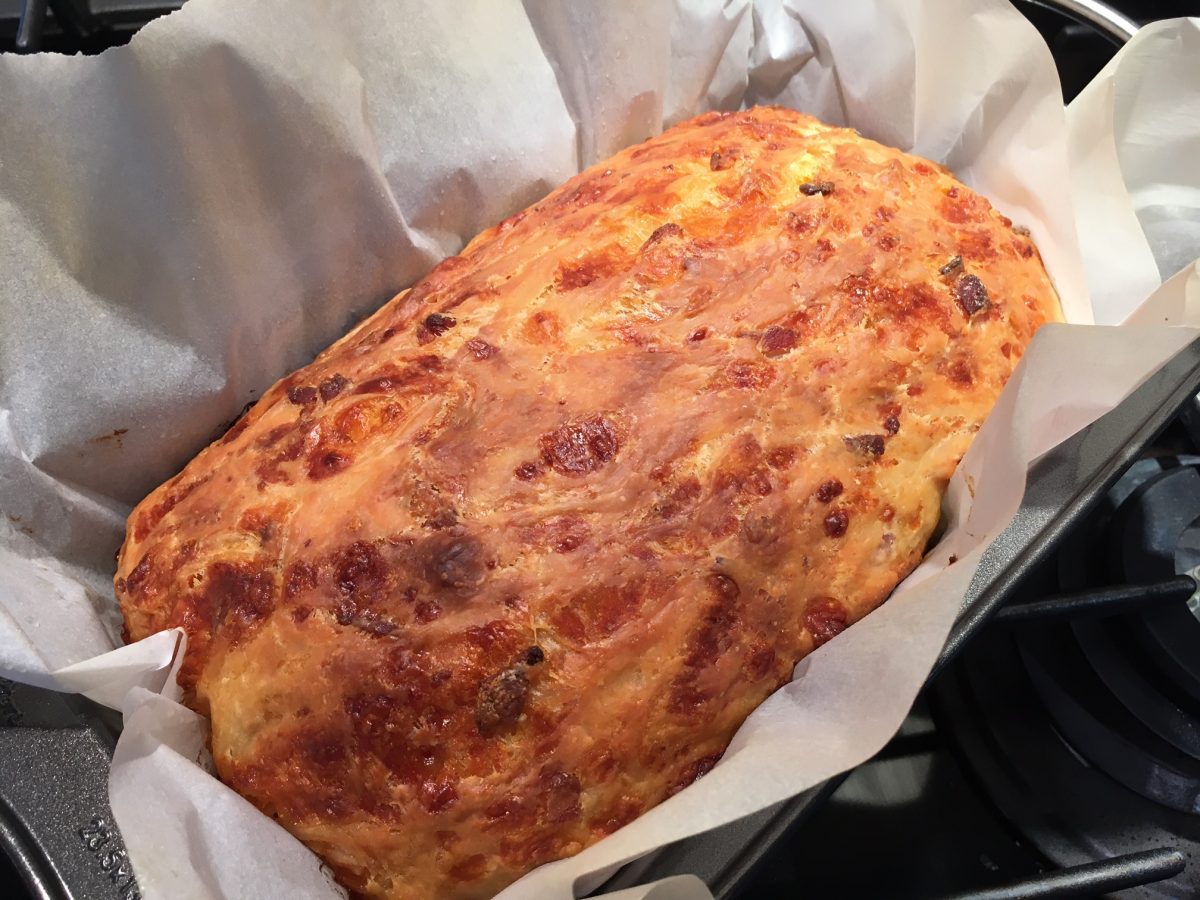 This is a perfect recipe for someone who doesn’t make bread. There’s no kneading involved and it’s very forgiving. I was actually reminded of a recipe I came across a number of years ago. It was a bread recipe from the New York Times and was a “no knead” bread that became an overnight sensation! Needless to say, I did make it several times! This Cheddar Bacon Bread is very similar. And simple.

I used to subscribe to Ricardo Magazine and they featured this recipe. I had to try it right away. It’s a very dense bread, similar in texture to a sourdough with lots of holes. Don’t be turned away by the length of time it takes to make this Cheddar Bacon Bread. It’s worth the wait. 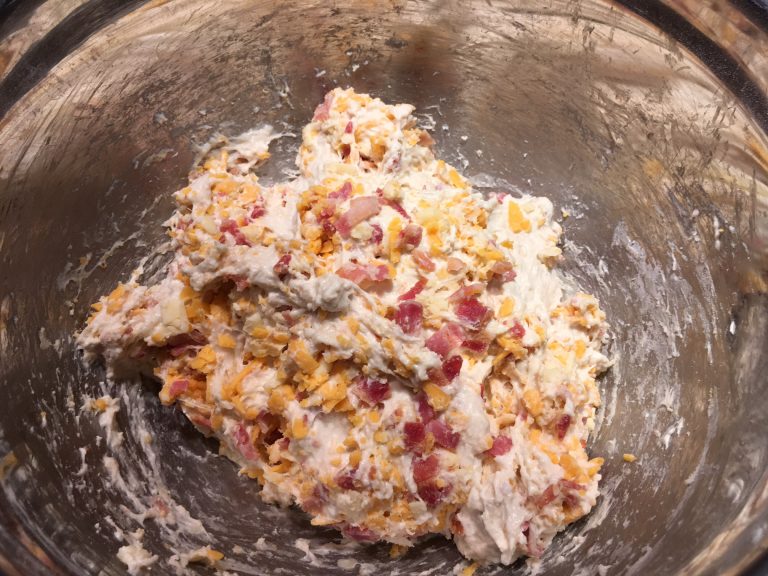 No knead bread has to rise a long time.

Once you’ve mixed everything together, cover with plastic wrap and let it rise at room temperature for 8-12 hours. I made mine at night and finished it in the morning after 11 hours. Yes, I left dough rising with meat and cheese in it for 11  hours at room temperature. Sounds crazy but I did.

Once it has doubled in size, punch it down, fold it over a few times (you can do this right in the bowl with your hands or a wooden spoon) and drop it into the loaf pan lined with buttered parchment paper. I think the butter is important because there isn’t enough fat already in the bread. OK that was a joke. Cover with oiled plastic wrap and leave it for about an hour until the dough has doubled in size. 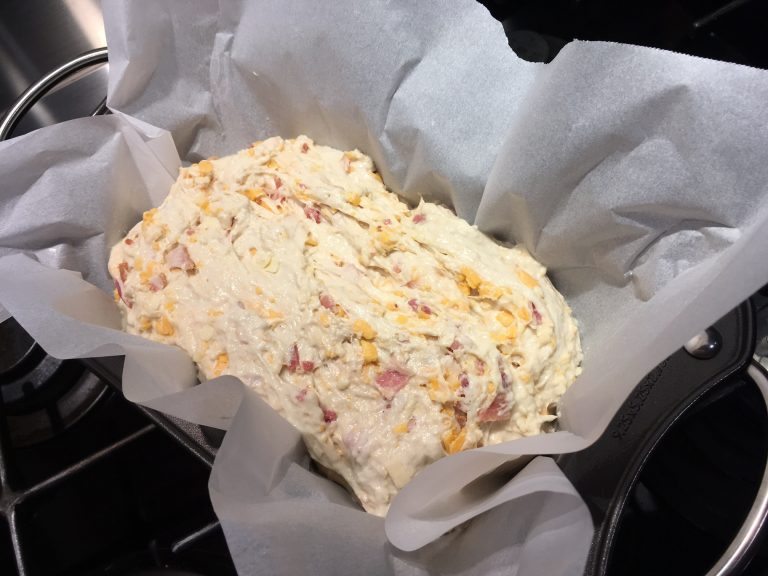 Preheat the oven, bake on the middle rack at 400 degrees for an hour. 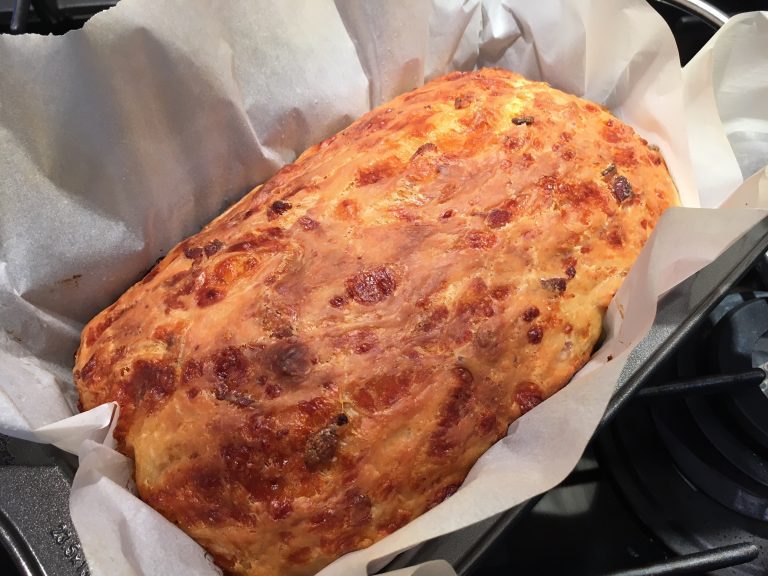 Cheddar Bacon Bread smells amazing while it’s baking and cooling! You’ll have a hard time waiting for it to cool enough to dig in. When I made my first loaf I had to go out while it was cooling on the counter. My friend Deb texted me this note: 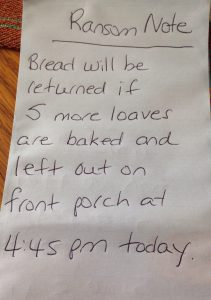 She didn’t really take the bread so I shared some with her that afternoon. 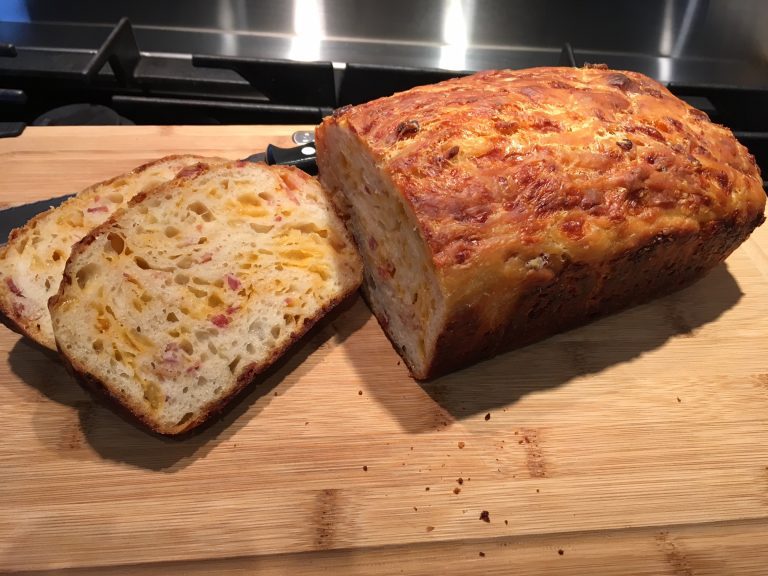 It was great toasted the next day too.

This is a very heavy dense bread. I made a second loaf using herbs instead of bacon and let it rise for about 20 hours which is similar to the New York Times version. It did rise quite a bit more than the first loaf and rose more during the second rising in the pan too. But the finished product was the same, fairly dense. But really, really good!!

I enjoyed this Cheddar Bacon Bread with some Curried Squash Soup with Crispy Sage so there was a healthy component to the meal.

Ricardo doesn’t publish a paper copy of his magazine any longer but the website features this and other awesome recipes. 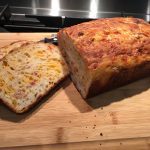