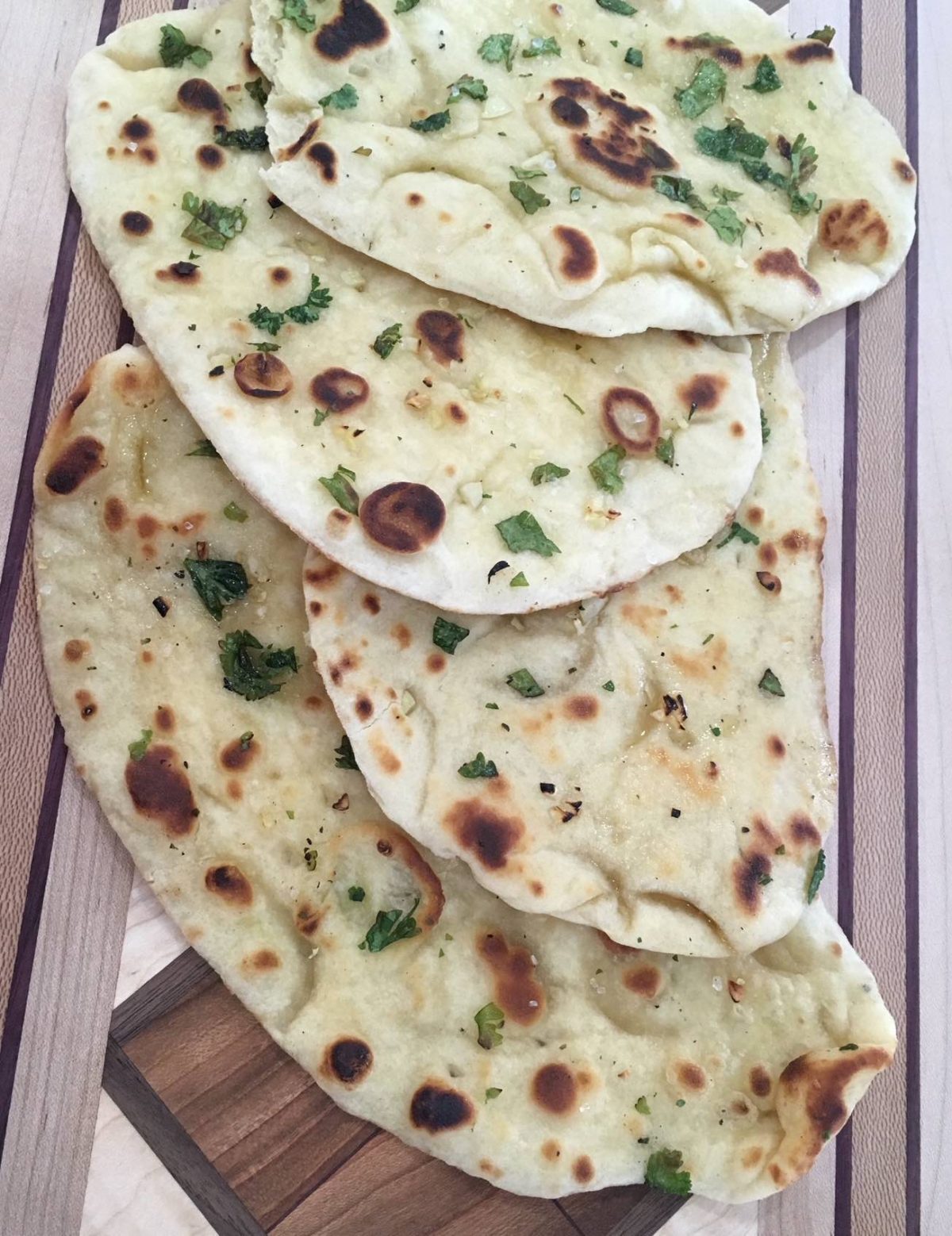 Garlic Naan Bread is pretty easy to make actually and doesn’t require yeast so it’s possible you have all the ingredients you need right now. Naan is served with many popular Indian dishes and is lately being used to make pizza too, so why not try your hand at this easy yeast free bread recipe?

One downside to living in a small community is the lack of diversity in the food department. Wouldn’t it be great to live in a booming metropolis and have a huge variety of international foods at your fingertips? But that comes with a pretty high price tag and a lot of other stuff that wouldn’t work for us. So, we prefer to make the best of it. Instead of driving a few hours for authentic Indian food, I’ve learned to make it at home. If you’re going to try making Garlic Naan Bread, you’ll have to check out Butter Chicken and Aloo Gobi too.

The first time I made naan it turned out pretty good. I wanted to try again and use a few different methods so I knew what worked best with the equipment I have. So of course I consulted the best source of information: youtube! There were 2,110,000 videos to choose from. I watched a few and compared methods and ingredients then stuck with the common elements and went for it.

I used the recipe and method from Manjula’s Kitchen but I finished mine a little differently.

The dough is easy to mix up with your hands. Make sure your yogurt is room temperature. It needs to rise for quite a while since there’s no yeast. It should sit for 2-3 hours at least and hopefully rise to near double in size. Be patient. 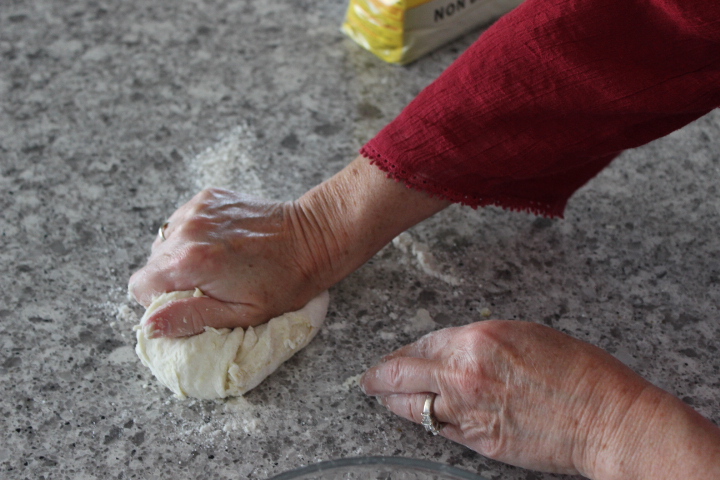 Once the dough has risen, knead it again, divide into 4 balls and let it rest again. This time only 10 or 15 minutes.

Then shape into naan. Use your hands, pressing, stretching or, what works well is a rolling pin. You won’t get perfect shapes. Which is exactly what you want for that authentic look.

I once cooked some on a pizza stone and they weren’t the best. They puffed up and were a little too crispy and dry. But, the upside was you could cook 2 or 3 naan at once on the stone.

The stove top frying pan was best in spite of having to make one at a time. The only thing that didn’t work for me was flipping the pan over and charring the tops over the open flame. The youtube personalities made it look easy and assured me that the bread would stick to the pan but it didn’t. How ironic is that? The one time you want something to stick to a pan, it doesn’t. 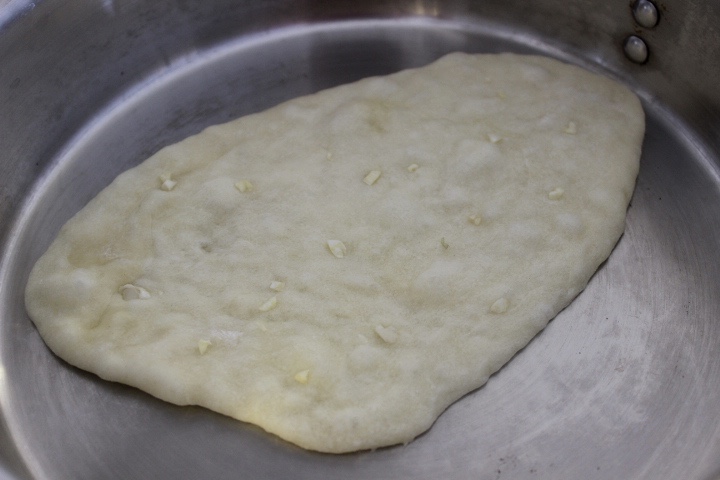 So I just used long tongs to hold the naan over the flame on the stove top. If you don’t have a gas or propane oven just flip them over in the pan, they turn out fine. Or, go out and buy yourself a new oven. You won’t regret it! 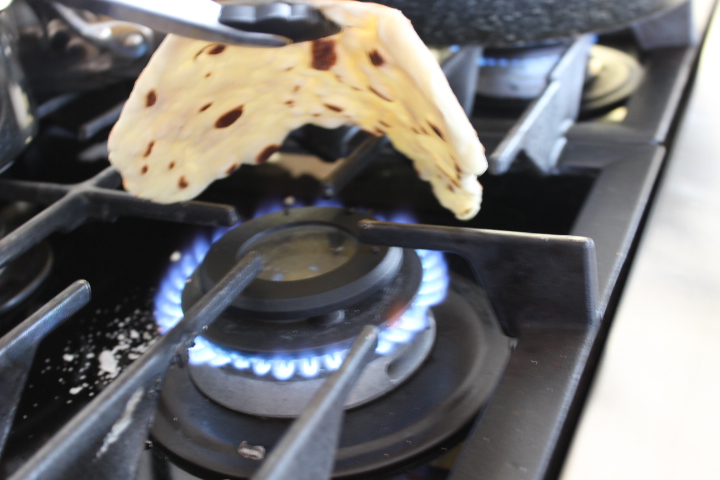 They take no time at all to cook. Press down any bubbles that appear on the surface. Once the naan looks dry at the edges and there’s some browning it’s time to flip. They take about 4-5 minutes per side but the second side usually cooks a bit faster.

There were quite a few options for topping naan in the various YouTube videos and online recipes I consulted. I expect this is because the actual dough is fairly standard so people personalize their recipe with their finishes.

The one common element is clarified butter. Or ghee if you can find it. Making your own if fairly straight forward. You basically are removing the water and milk proteins by gently boiling them away. Using unsalted butter is preferred because the salt content intensifies as it clarifies. This method allows you to use butter that can withstand a much higher heat than regular butter.

Some recipes for naan had toppings added after cooking, some added before. I used garlic and pressed the small pieces gently into the rolled dough before cooking so they would stick. Then I brushed the tops with clarified butter and sprinkled a bit of sea salt and cilantro after they were cooked.

You can make plain naan if you want but they wouldn’t look like this. 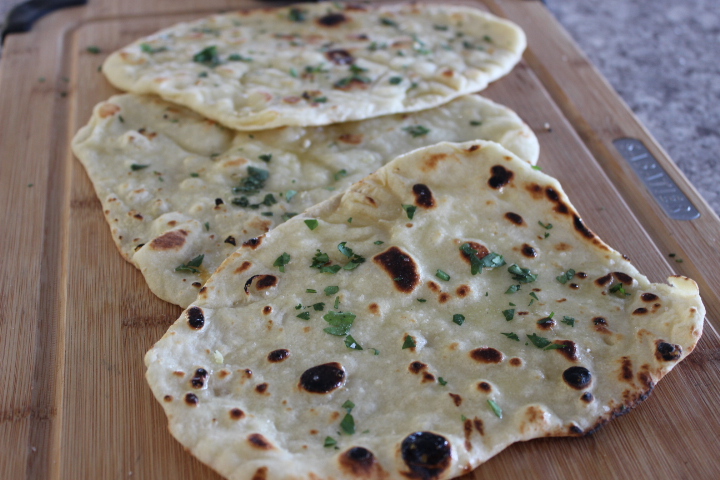 I would say they turned out pretty good. Why not make some Butter Chicken to go with them! 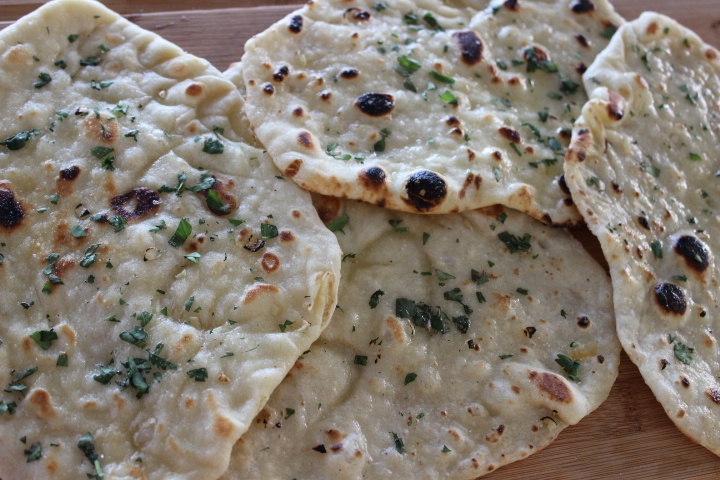