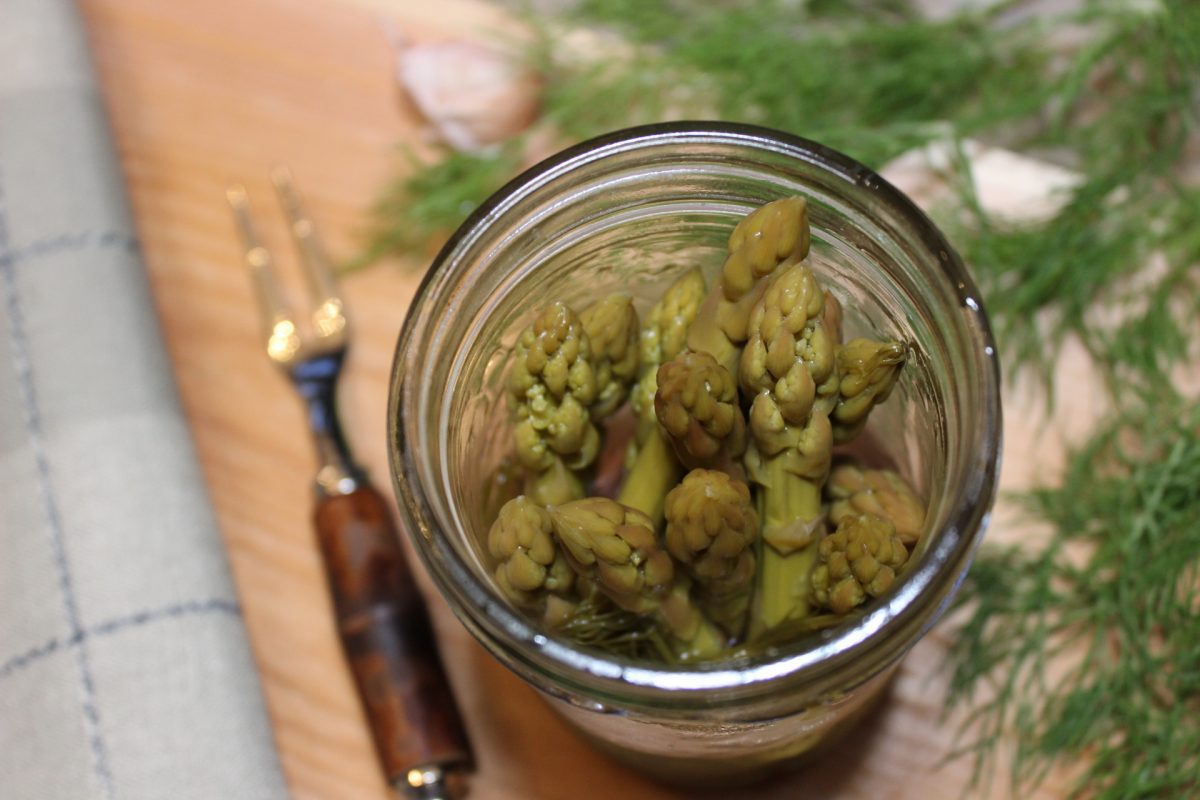 I wish we could get fresh local asparagus year round. But we can’t, so this is one way of preserving them. A fun way actually, because you can be a bit creative in what you choose to add to the jar. As well, it’s an easy pickling recipe and they’re ready to eat in a week. Here are two versions of Pickled  Asparagus using the same brine so you can make two different kinds at once. These pickles are adapted from a recipe I picked up at my favourite asparagus farm, JLK Farms. We will be making Dill and Garlic in the first batch and Sweet and Hot in the second.

After some discussion with my mom, an expert pickle maker, we decided that you don’t need to blanch the asparagus first. She doesn’t make pickled asparagus but we agreed that they would be too soft. Once you pour boiling brine over them, they’ll cook a bit. The brine has alum in it which helps to keep pickles crunchy. I’ve had alum in my pantry for years and I’m not sure if it’s even effective after this long but they did maintain their crunch so….maybe. If you don’t have any I wouldn’t worry about it unless you’re expecting the pickle police to stop by. 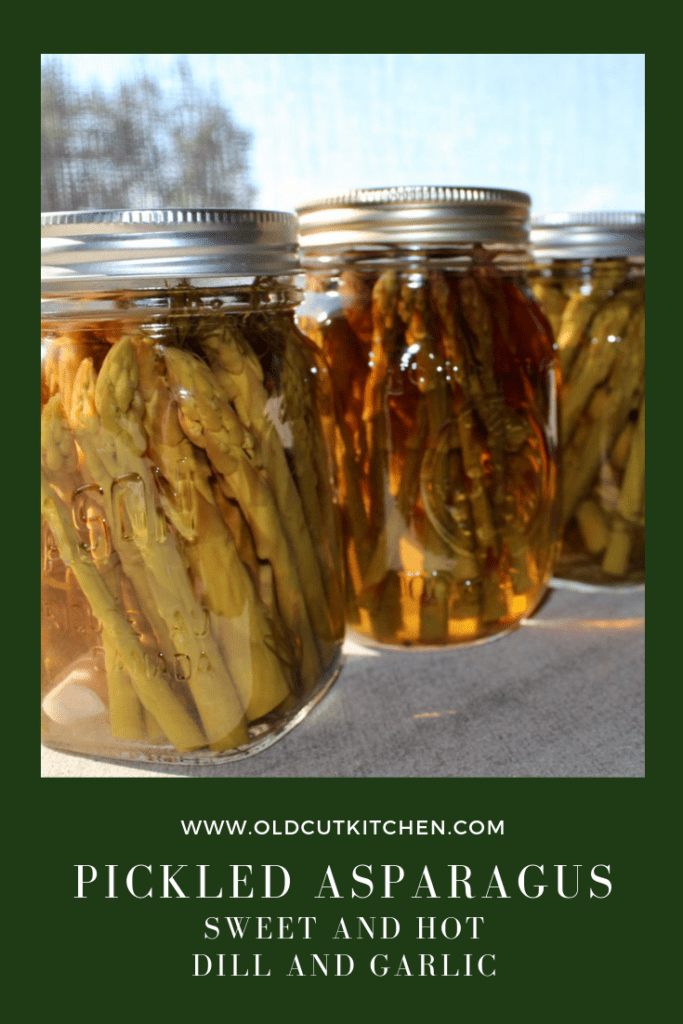 You don’t need any special equipment to make these so this is a great option for someone who hasn’t made pickles before. This is a very forgiving method. And, you can make a few jars and put the remaining brine in the fridge to make a few more later. It’s that easy.

This recipe is included in a free downloadable collection of asparagus recipes by Yummy Farm in partnership with Ontario Asparagus. Click here to see the collection. 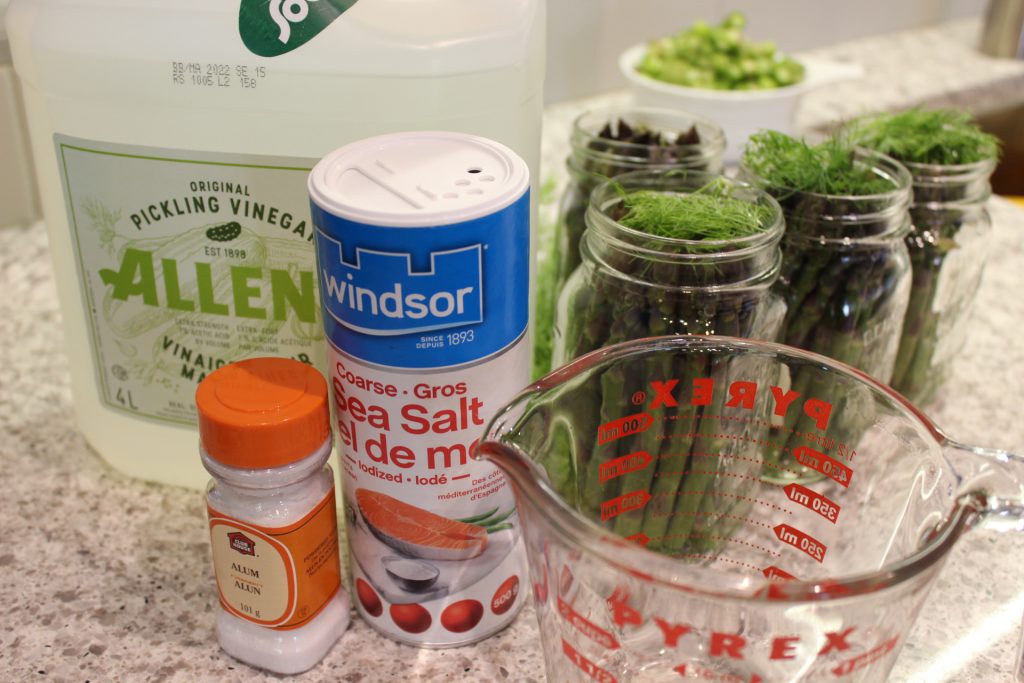 You’ll want to start the water bath first because it takes a while for a large pot to come to a boil. Fill a deep pickling pot with enough water to cover the jars over the lids when immersed on the rack and bring to a boil. You can also use a double boiler if it’s deep enough.

How to make pickled asparagus

Start by rinsing the asparagus well and snapping off the woody ends. Remember that asparagus from Norfolk County is grown in sandy soil so rinsing is very important. Look for nice fresh picked asparagus with tightly closed heads. The thinner spears are preferable, mostly because they cook just the right amount during the canning process while still keeping that pickle crunch. And you can fit more in the jars.

Cut one spear to the desired length to fit perfectly in the jar, then use that spear as a guide to cut the rest. Line them up at the top and chop off the bottoms evenly. You can use the bottoms in the jars too or save them to make Roasted Garlic and Asparagus Soup. 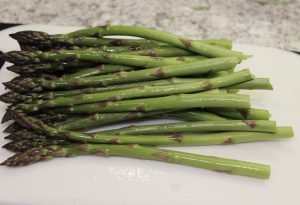 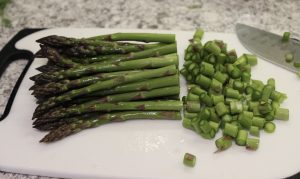 Wash 7 pint sized jars. A pint is 500 ml or 2 cups. You can actually use any size of jars you want but these are not too tall or short. They look nice filled with full spears facing upright. Depending on how tightly you pack the jars, you may have enough brine left to make an 8th jar. I usually save the odd sized pieces and make the last jar for the fridge. And if you’re really good at packing those jars tightly and you’re not hiding some of the bottom pieces in there, you may need more than 6 pounds of asparagus.

This version is based on the basic Dill Pickle recipe I use and is almost entirely the same. So if it’s not asparagus season you can make pickled cucumbers just as easily.

Put a frond of fresh dill in the bottom of each jar, along with a peeled clove of garlic. Fill each jar with upright asparagus spears, tightly packed, making sure the spears are just below the top. If you lay the jar on its side, it’s easier to get them started evenly. 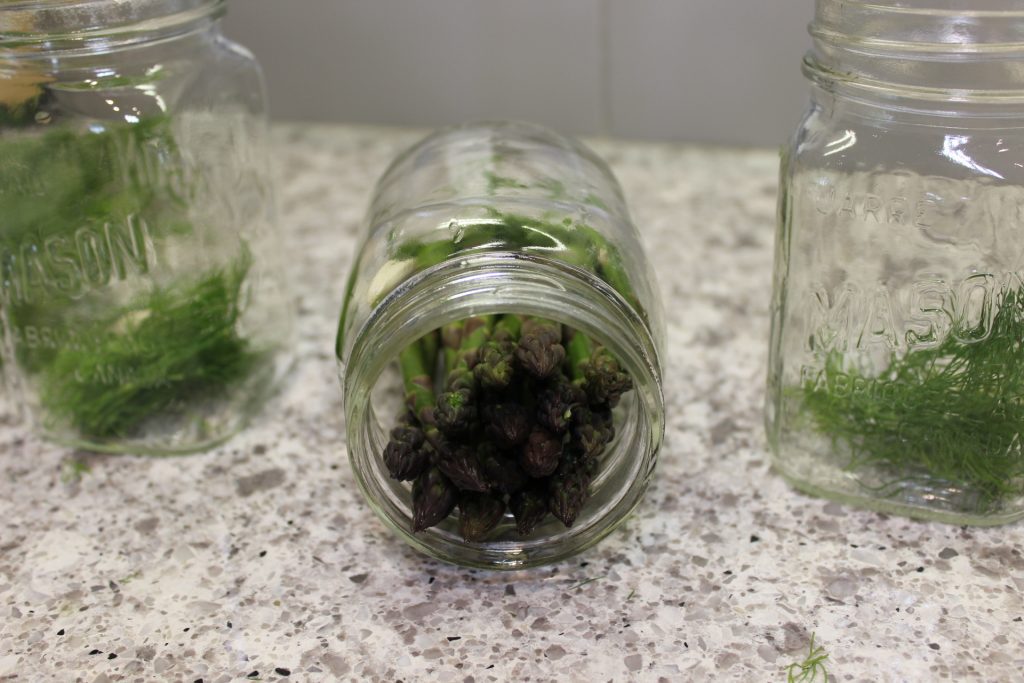 Add another frond of dill to the top of each jar. The fronds don’t have a strong dill flavour so pack enough in so that you don’t just taste garlic. If you can find dill weed, they have a better dill flavour but around here they tend to show up after asparagus season ends. You could add some dill seed for stronger flavour if you have some on hand. 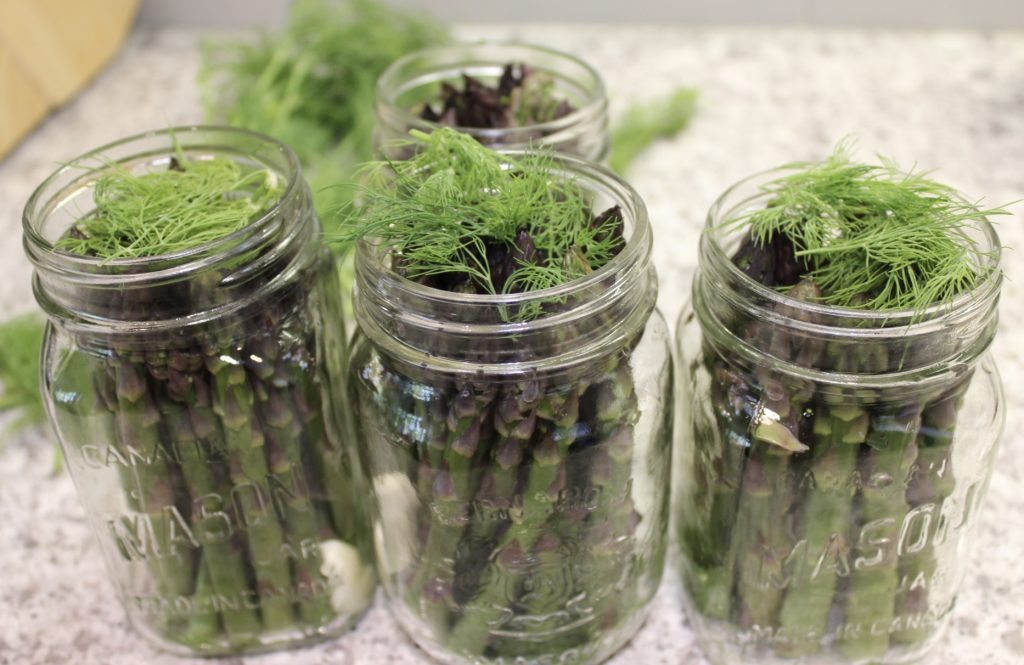 Combine the water, vinegar, alum and course salt in a heavy saucepan. Any pure salt works but table salt has additives to keep it from clumping so it’s not the best choice. Also you would use less because it’s ground much smaller. It might even make the brine cloudy. Bring to a boil to ensure the salt has dissolved. I’m using pickling vinegar which has an acidity level of 7% which is higher than regular vinegar, normally 5%. Pour hot brine over the jarred asparagus, leaving a little bit of room at the top, around 1/4 of an inch. 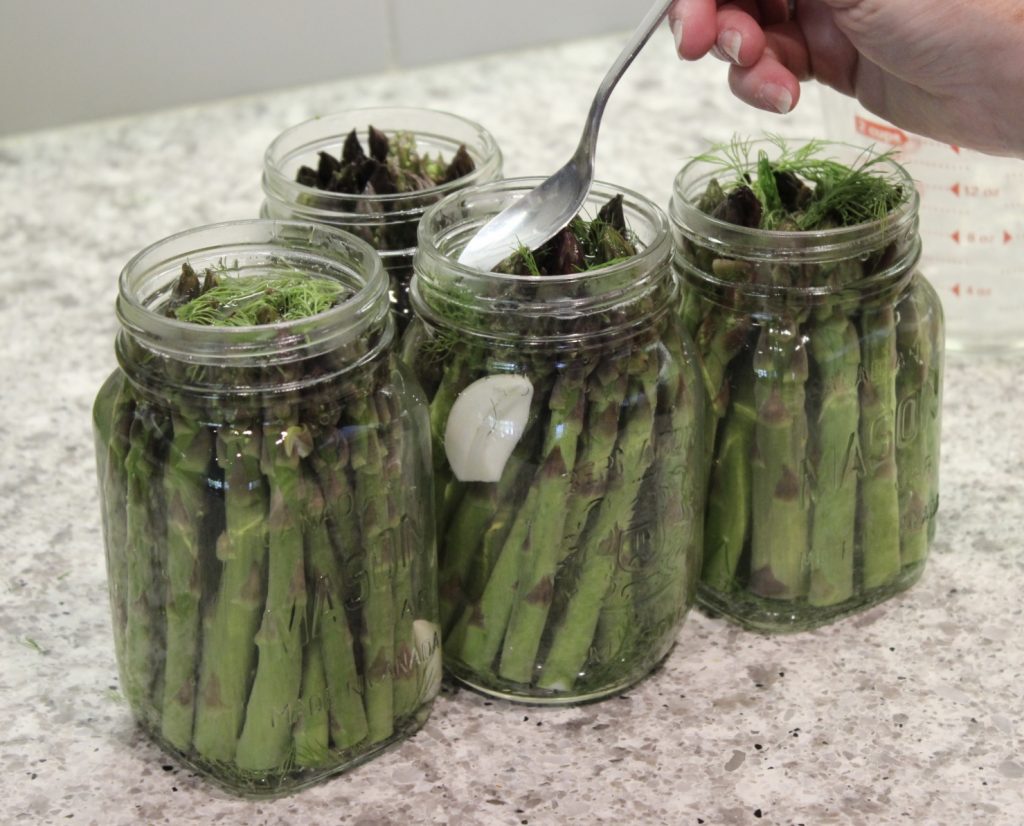 Use a spoon to make sure there’s no dill on the edge of the jar, otherwise you may not get a tight seal.

You should always use new seals for the jars when you’re making pickles. Heat the lids and seals in simmering water to soften the rubber seal before putting them on the hot jars. You can actually just heat up the seals but they’re flat so good luck getting them off the bottom of the pan. It’s easier to grab the edge of the lid with tongs, tip the water out and flip them onto the jars.

Since you’ve already got simmering water ready for processing, put the lids in that water for a few minutes.

The purpose of the water bath is to process the jars so they can be stored in the pantry. As the jars cool, they form a tight seal. Also any bacteria is killed by heating the contents. The vinegar also acts as a safety net to ensure there’s no bacteria left around. If you don’t have a pickling pot you can be creative. 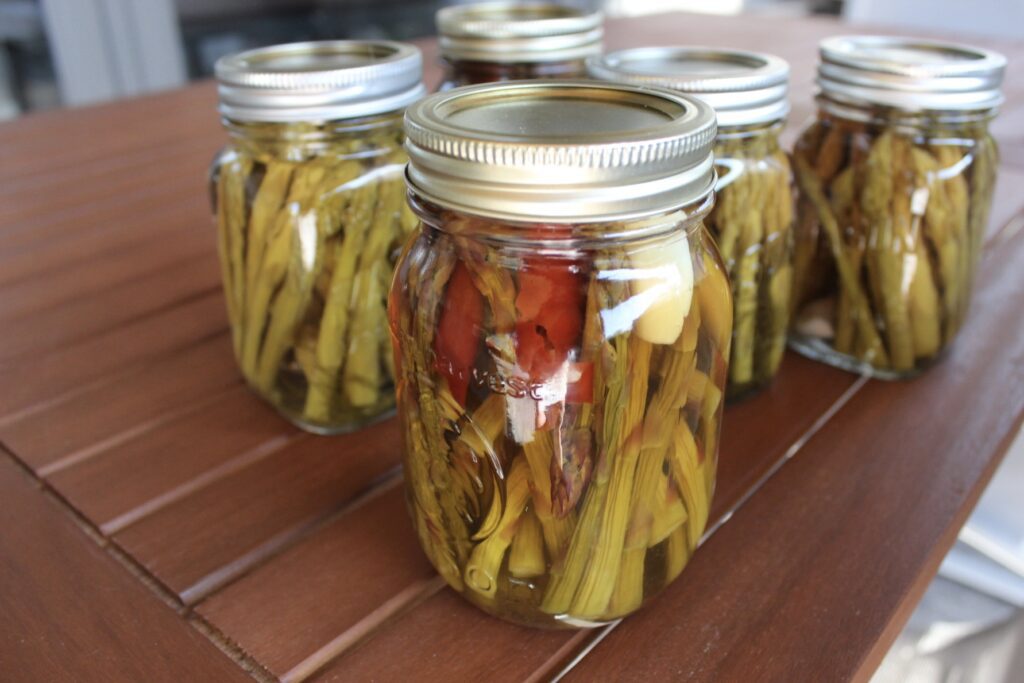 You just want to keep the jars off the bottom of the pot and keep them from touching each other. Put the rack in first, then carefully lower the jars into the pot. Otherwise you’ll be putting your hands into boiling water. I wouldn’t recommend it. If you don’t have a rack you can put a dishcloth in the bottom of the pot. Immerse the jars completely and boil for 10 minutes. Remove the jars carefully and allow to cool. You may hear them pop as they cool, that’s a good sign. The metal top should be slightly indented. You will have to do this in a few batches. If you’re doing tiny jars or larger jars, adjust the water bath time accordingly, so maybe 6-7 minutes for smaller jars and 12-13 minutes for larger.

If you prefer to skip the water bath processing, just put the jars in the fridge. They’ll keep for a few months.

While the Dill and Garlic Pickled Asparagus are cooling, get ready to make the sweet and hot batch. Or, you can put the pot of brine in the fridge and make it later.

Fill each jar with asparagus spears. Add 1 tsp of pickling spice to each jar along with a small clove of garlic and a dried or fresh hot chili pepper. I used a dry pepper and crushed it somewhat. You want the seeds to be in the mixture, otherwise it won’t be hot. You can use any type of pepper, keeping in mind some are hotter than others. Pick out some of the cloves from the pickling spice mix if you like. I did. I find them a bit too strong. 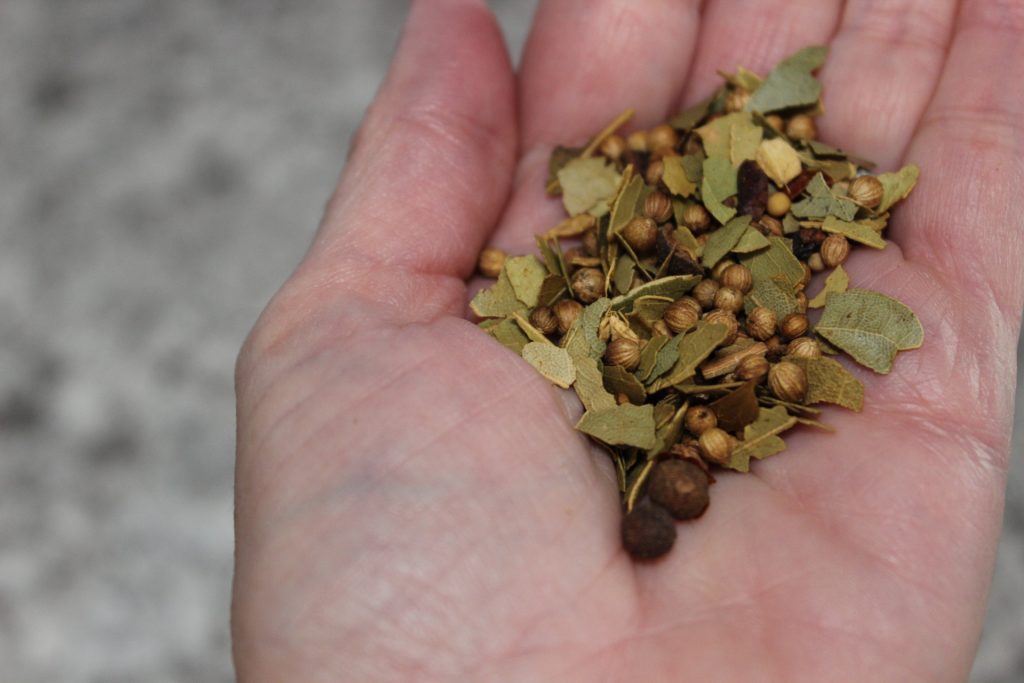 The cloves are at the bottom.

Pour the sweet brine over the jars and seal using the same technique as before. Process for the same amount of time as the dills. 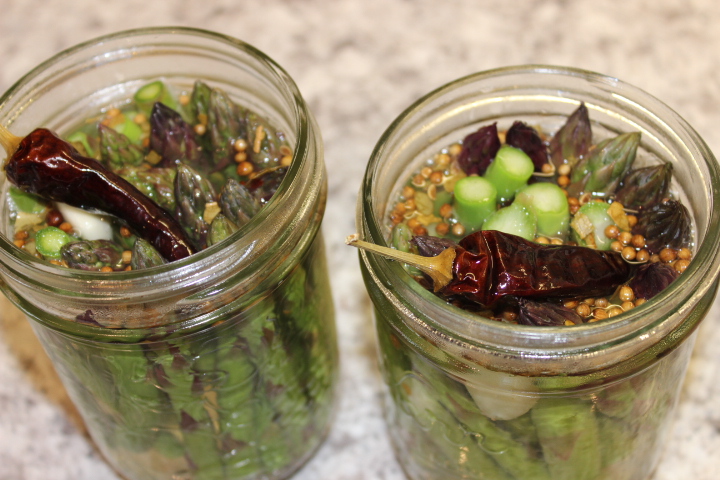 They’re ready to eat in a week. But they get better after a few more weeks. And they tend to get hotter the longer they sit. 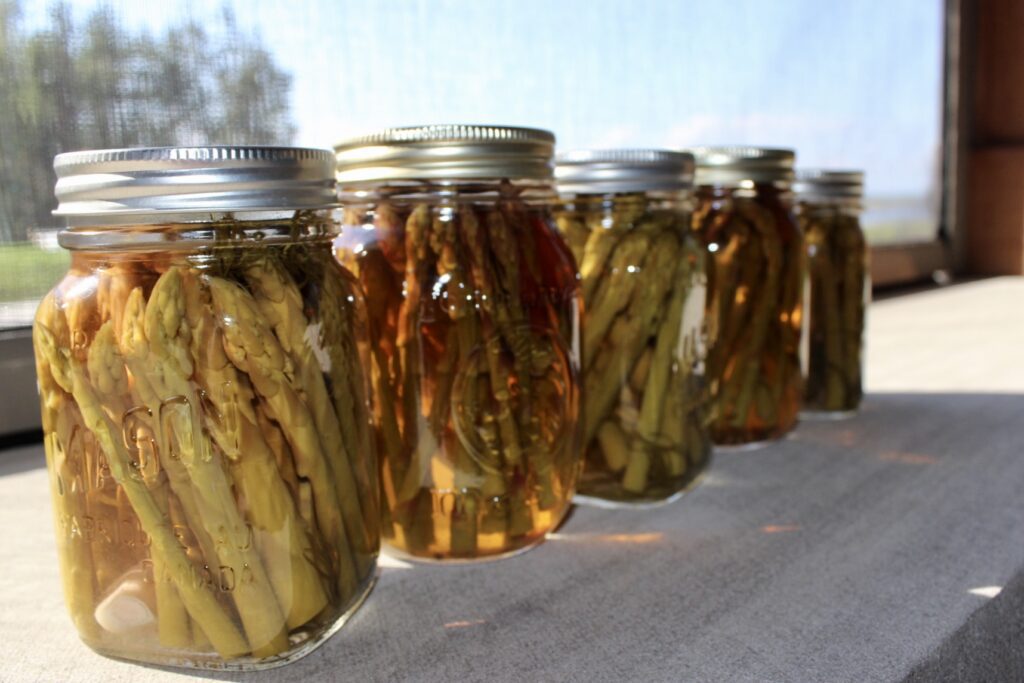 You may notice a pinkish colour to the brine. This is the pigment that gives beets their colour. Certain growing conditions like cold nights increase the amount of that pigment in asparagus. Also, the asparagus will shrink after processing so don’t worry if a few spears aren’t covered by the brine when you first pour it in the jars. And if your garlic turns bluish it’s not anything to worry about either, it’s a chemical reaction with the salt.

For Dill and Garlic Pickled Asparagus

For Sweet and Hot Asparagus

You can skip the canning process and store all the jars in the fridge. They will keep for months.
Print Recipe

click HERE for a free downloadable collection of asparagus recipes including this one!

One thought on “Pickled Asparagus”