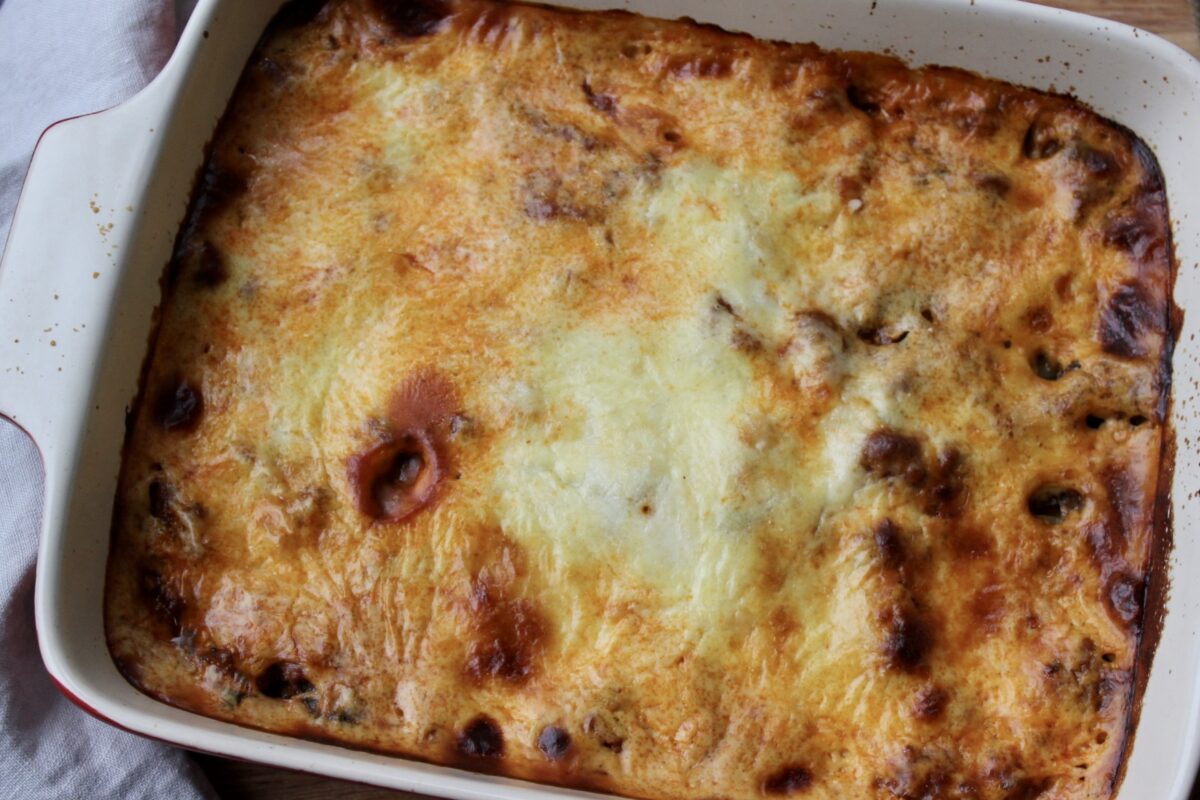 If you’ve never had Moussaka it’s sort of like a Greek version of lasagna. I’ve always wanted to make it but I wasn’t sure about the combination of spices in the meat. Cinnamon, nutmeg and cloves sound like pumpkin pie to me. But, curiosity got the best of me so I consulted numerous versions on the internet and came up with this recipe that passed not one but TWO taste test dinners!

Moussaka is a three layer dish that starts with eggplant and potato, then a thick layer of meaty fragrant tomato sauce, topped off with a creamy cheesy white sauce. It takes a while to put this together because each layer takes some prep time and the meaty sauce needs time to simmer and reduce, so save this one for a day when you have time. And you’re going to have a lot of dirty dishes but trust me, it’s worth it.

This is best made and baked on the same day.

Greek Moussaka with Beef and Lamb or Pork

Start with the meat sauce. Traditional Greek Moussaka is made with lamb. I love lamb. I decided to use a combination of beef and lamb because lamb on its own can be rich. If you prefer, you can use ground pork instead of lamb. But you may be surprised, the meat mixture is very tasty in this version of the recipe.

Dice a medium onion and mince a few large cloves of garlic. Sauté in olive oil until softening, then add the ground meat. Make sure you brown the meat before adding any liquid, otherwise you’ll be missing out on some important flavour. Once the meat is browned you may have to spoon out some of the fat if it looks like there’s quite a bit. It all depends on the meat you use.

Add some red wine to deglaze the pan, meaning when you pour the liquid into the hot pan, the brown bits (called “fond”) will melt as you scrape the pan with a wooden spoon and will be incorporated into the flavour. Let the wine cook for about a minute or so. Just to cook off the “boozy” aroma. You could substitute beef stock or water but….like I always say, why would you?

Add the crushed tomatoes and tomato paste. Season with salt and pepper, add cinnamon, nutmeg and cloves, a bay leaf and some dried oregano. If you happen to have a cinnamon stick, use that instead of ground cinnamon. Add some fresh chopped parsley. You MAY want to add some sugar. Sometimes canned tomatoes have a very acidy or sharp taste. The red wine may solve the problem, but if you taste the sauce and it seems “sour” sprinkle some sugar in. It will mellow as it cooks.

What are the spices in Moussaka?

Some Moussaka recipes call for allspice. It’s something I don’t usually have on hand but cinnamon, nutmeg and cloves are a great substitute and much more common. And they don’t overpower the dish, it’s more of a subtle scent and flavour.

Let this simmer for at least an hour, stirring often. Leave the lid off at least part of the time to allow moisture to evaporate so you’re left with a nice thick sauce….and a great smelling kitchen. 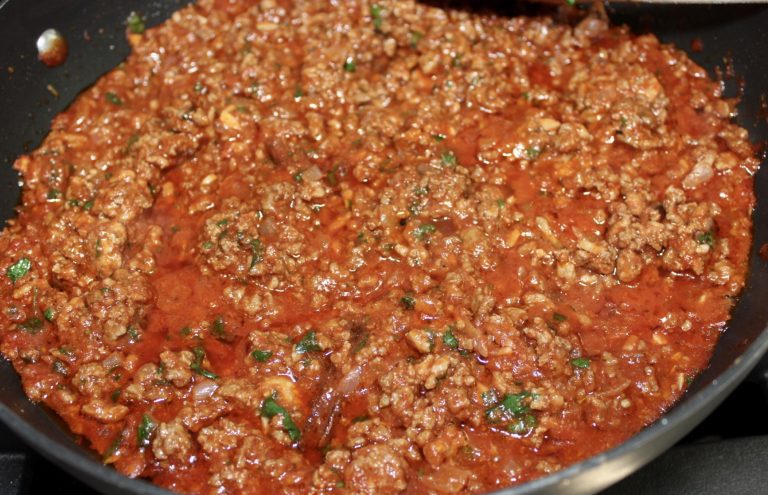 Next, prepare your base layer. I noticed many versions of Moussaka suggest alternatives to frying the slices of eggplant, however it did turn out to be a necessary step for best results. I experimented by roasting the slices on a baking sheet sprayed with oil but the finished baked moussaka had a layer of liquid on the bottom that the fried eggplant version did not.

Do you peel eggplant?

Eggplant skin can be tough so peeling them, even partially is preferred. 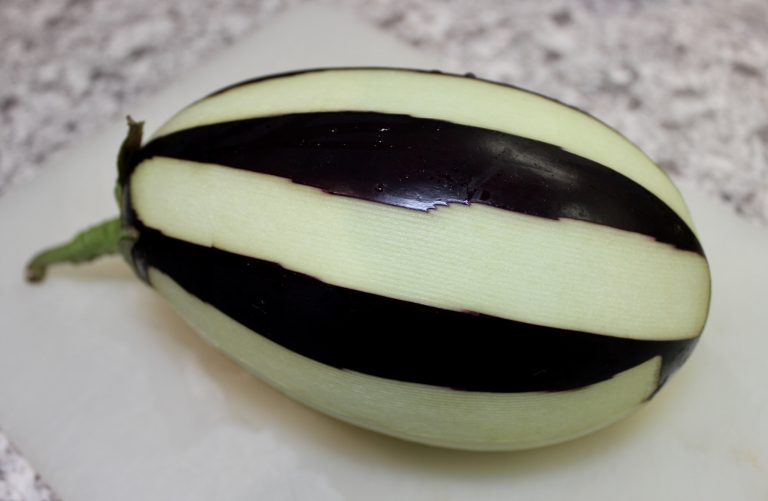 Slice the eggplant into rounds about 1/2 inch thick, lay on paper towel and season with salt. Leaving them for about 30 minutes helps pull the liquid out of the slices which can make the eggplant bitter and watery. If your eggplant is really fresh it probably won’t release much liquid. I used one I picked minutes before making the Moussaka. Now that’s fresh!

Heat a wide frying pan to medium, drizzle some olive oil in and fry the slices until they’re browning, turning to brown each side. Drain on fresh paper towel and layer in an oiled or buttered baking dish, overlapping slightly to cover the entire bottom. 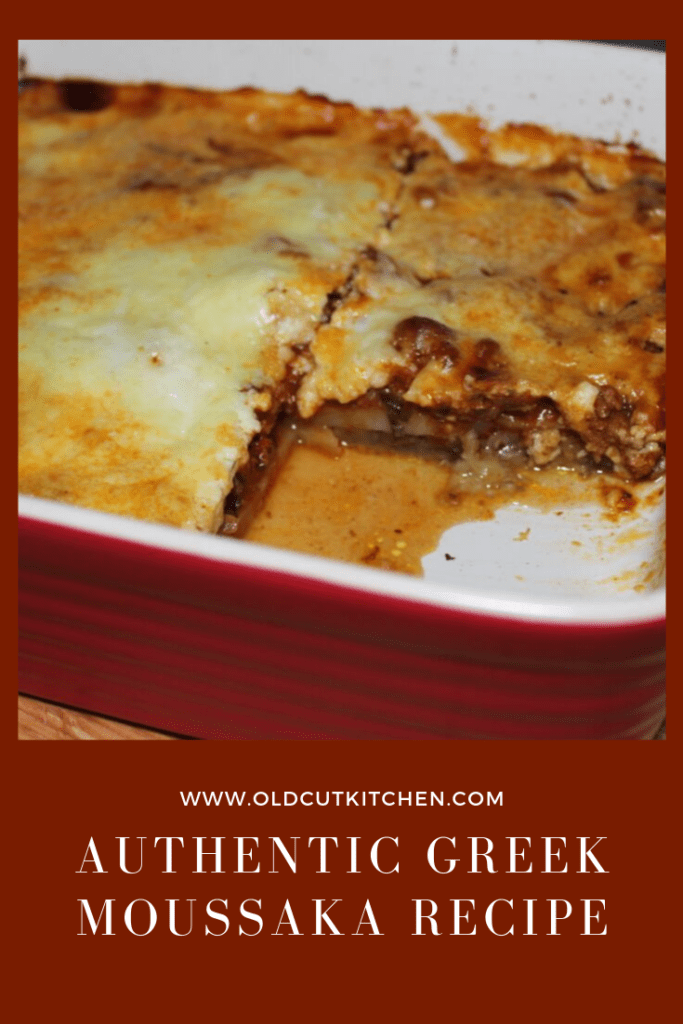 Peel the potatoes, slice and fry, turning once. Pile on top of the eggplant layer, using the same layering method. 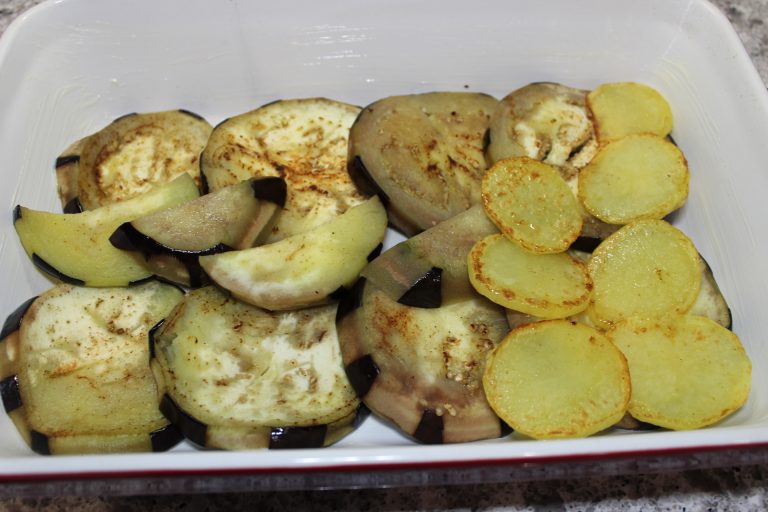 Check the meat mixture for seasoning. Add additional salt if necessary and remove the cinnamon stick and bay leaf. Pour over the eggplant and potato layer. 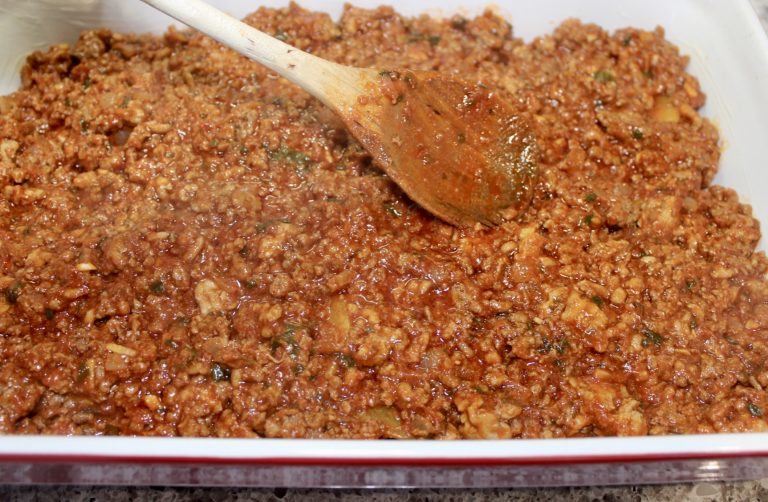 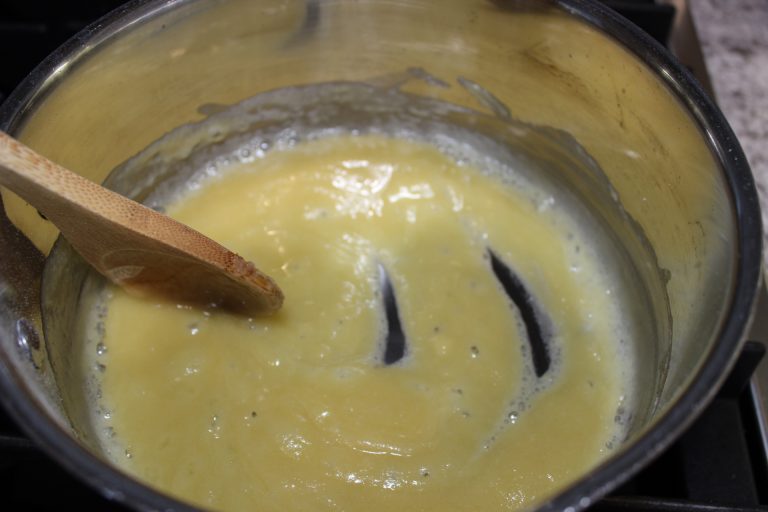 Heat milk and pour in a small amount, stirring well. Continue adding milk and whisk well until you have a smooth sauce. Lower heat slightly and watch carefully, stirring occasionally while the sauce thickens. It needs to come to a simmer.

Turn off the burner and add nutmeg, salt and white pepper. White pepper just looks better in a white sauce. Grate some parmesan cheese and stir it into the sauce. Separate the eggs, reserving the whites for another use while the sauce cools slightly. Whisk the yolks. Don’t add to the hot sauce all at once or you’ll have scrambled eggs. Best practice is to “temper” the eggs, meaning adding a small amount of warm sauce to the egg yolks, stirring, then adding the yolk mixture in small amounts into the warm white sauce.

Pour over top of the meat mixture. Grate some extra parmesan cheese over top. 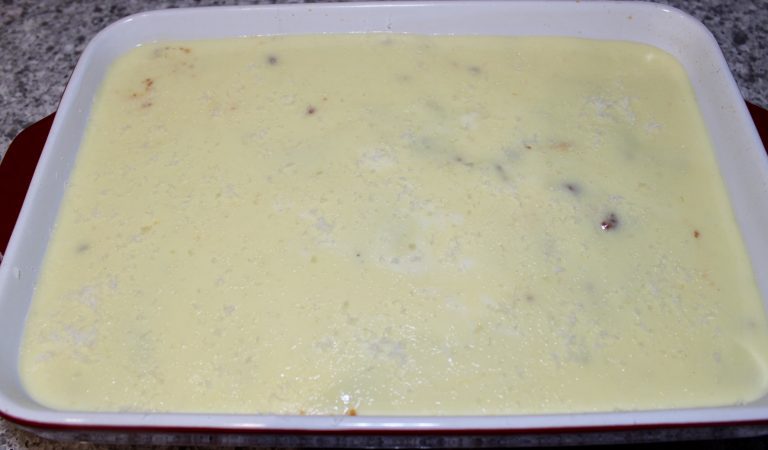 Bake in the middle of the oven for about 1 hour until the top starts to bubble and is browning. If you have a convection setting, turn to convection for the last 5 minutes or so to ensure the top is brown. 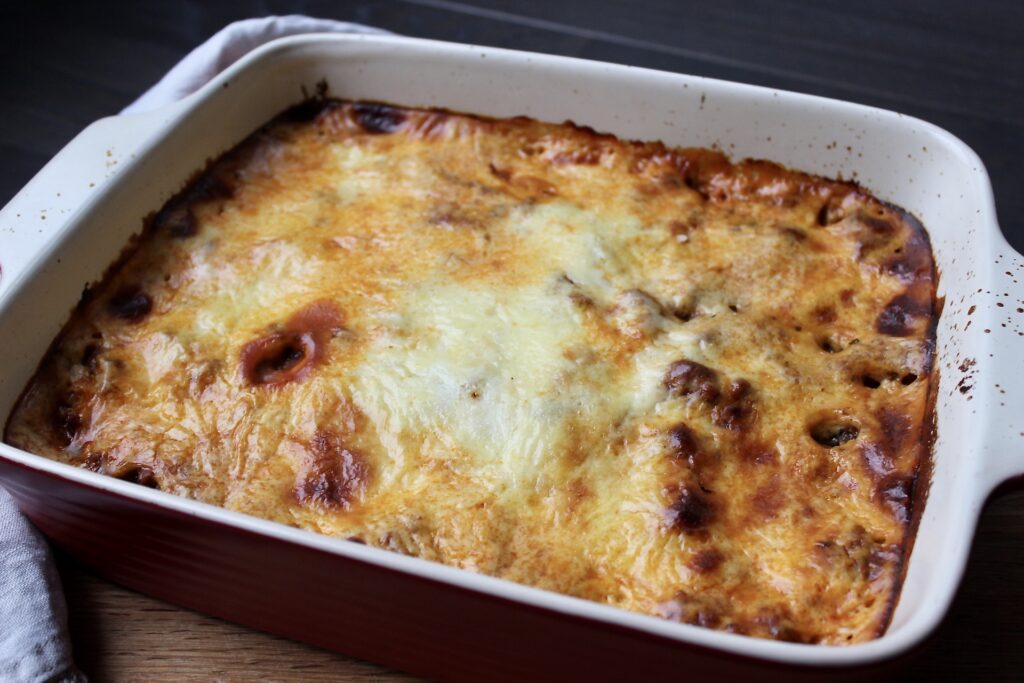 You’ll want to dig in right away but you need to let this rest for at least 15 minutes so you can serve it without it falling apart. 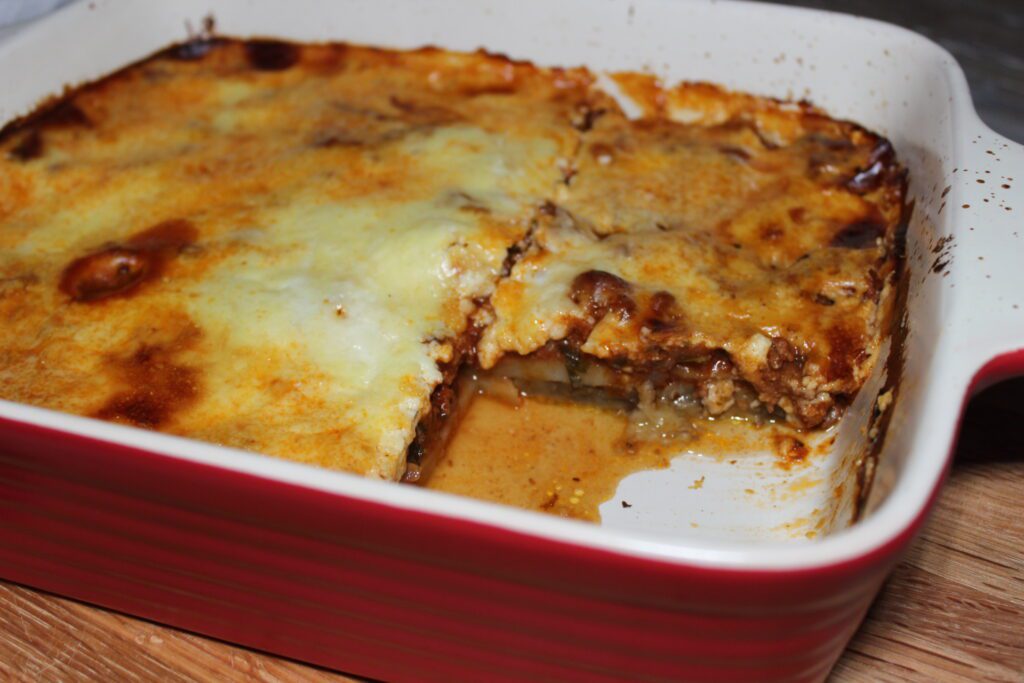 Make this a Greek meal and serve with Greek Salad and Olive and Onion Bread. 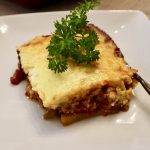