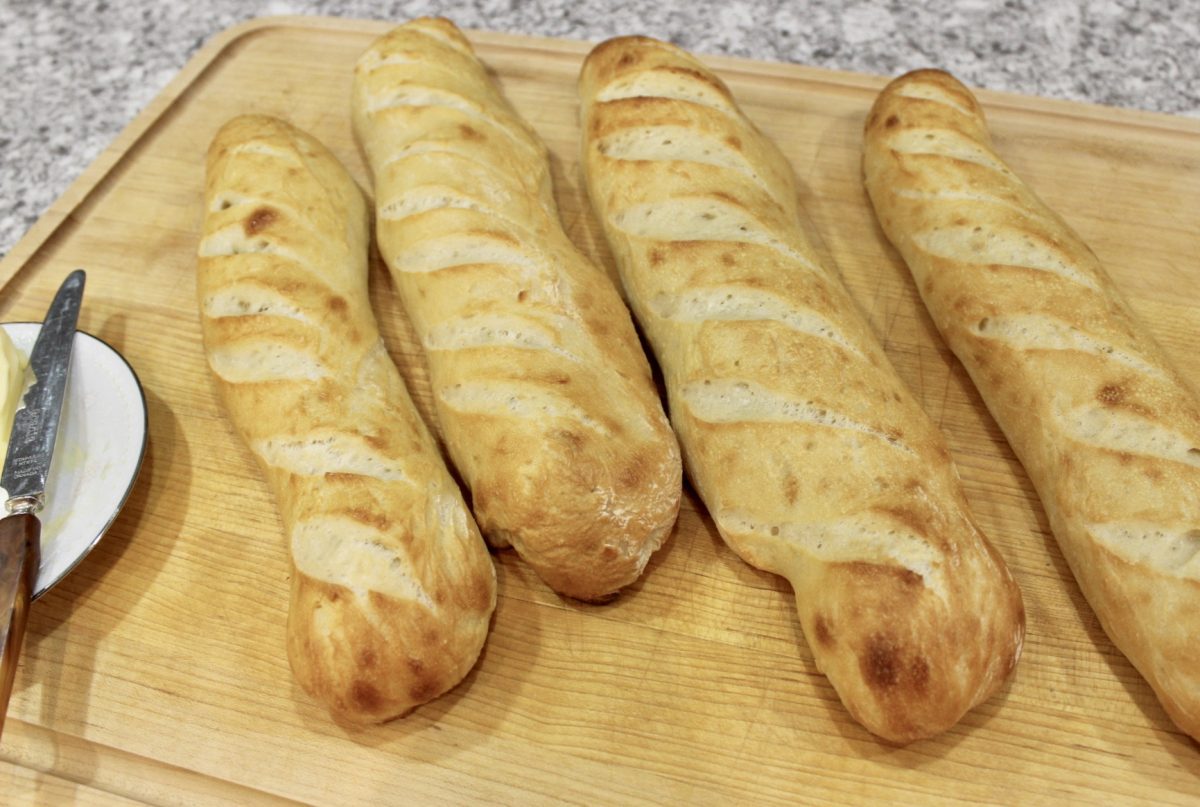 I think bread has a bad rap. I mean yes, some people can’t eat it. I’m sad for those people. But who can resist a warm loaf of freshly baked bread? Not me! This recipe came from a book called French Women Don’t Get Fat. I’m not sure if that’s true or not but the Baguette recipe was worth the price of the book.

If you haven’t ever made bread you might be thinking there’s some skill involved or secret method. The truth is dough is pretty forgiving. And for the price of a few cups of flour and some yeast, it’s worth a try.

If you have a stand mixer, all the work is done for you. If not, just roll up your sleeves and give it a go!

If you don’t think you’re ready for bread making at this level, start with New York Times No Knead Bread which is super easy and doesn’t require any special skill or equipment. 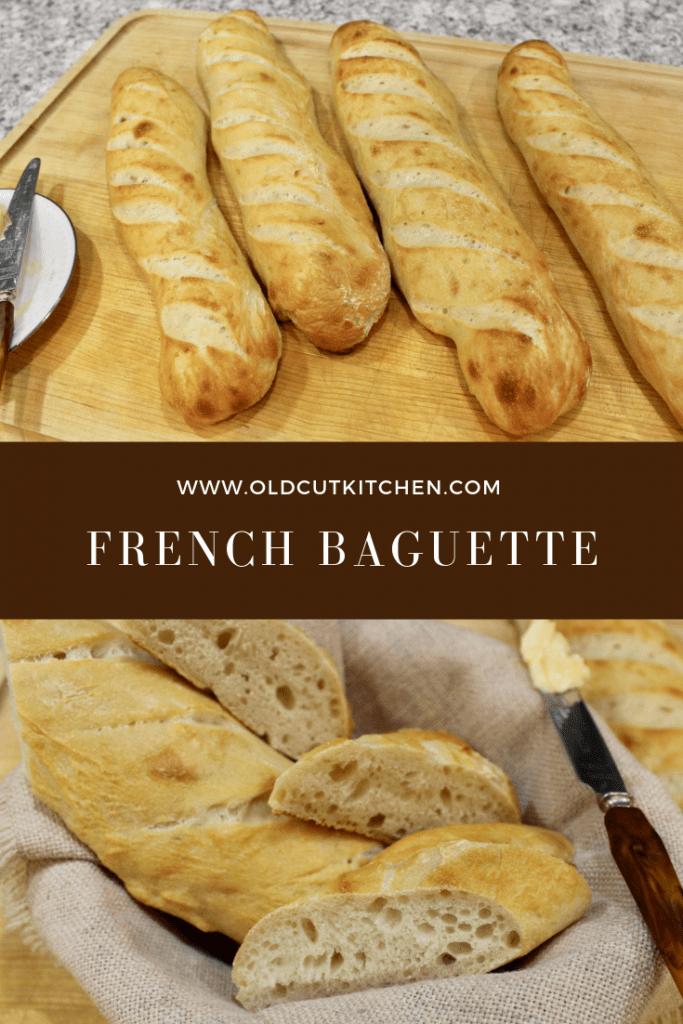 Start by proofing the yeast in some warm water. What that means is the yeast will foam up to confirm it’s “alive.” If your water is too hot it may “kill” the yeast so the temperature should be around 110-115 degrees. 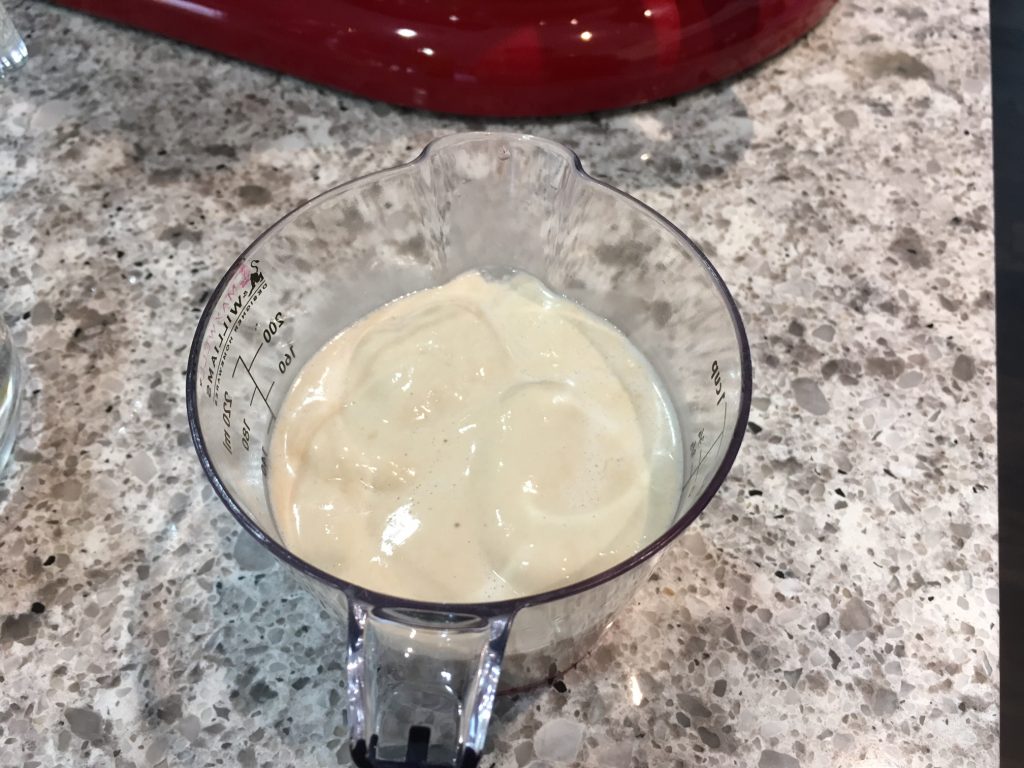 So what if it doesn’t foam up? That has happened to me with fresh yeast but I used it anyway and the bread turned out perfectly fine.

Combine the flour and salt in the bowl of a stand mixer. If you don’t have kosher salt, use a course salt like sea salt. If you only have table salt, use about half the amount. Then add the yeast mixture once it’s foamy, along with the rest of the warm water. Knead it with the dough hook on a low speed. I use #2. By hand you knead it for 5 – 10 minutes on a floured surface. 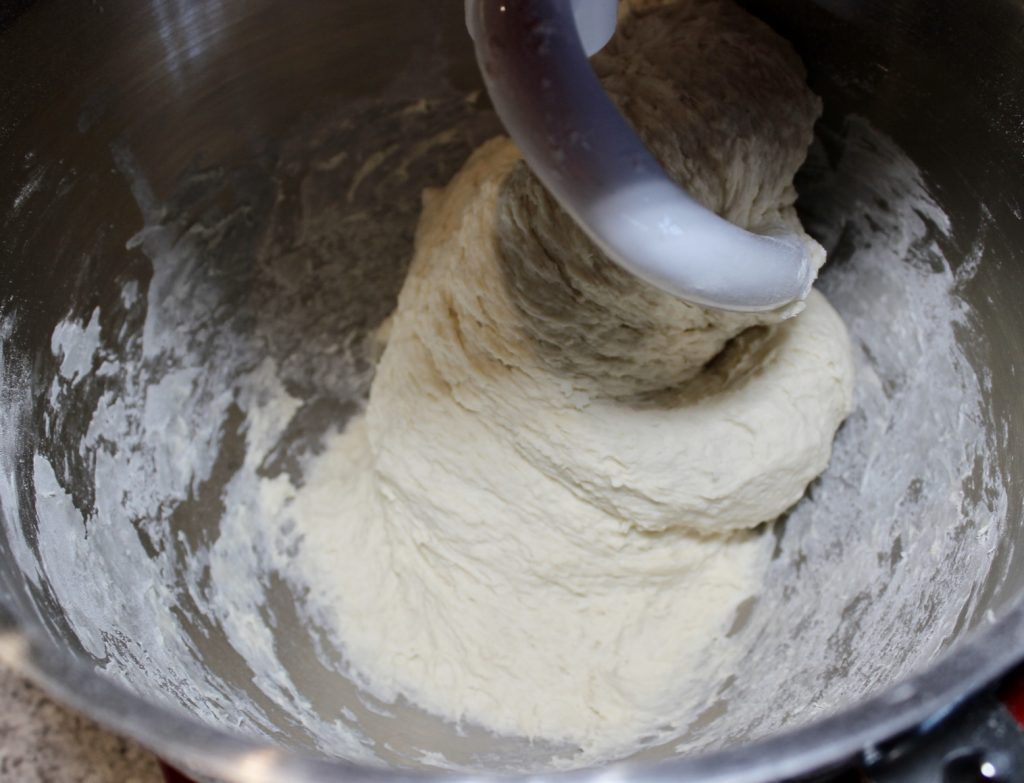 If the dough is sticking to the bowl after kneading for a few minutes, it needs more flour. The recipe calls for 4-5 cups of flour which is quite a range. Start with just over 4 cups and add in small amounts until the dough starts staying together and not sticking to the bowl. You may also use bread flour which has a slightly higher gluten level. If you do, you won’t need as much flour as all purpose flour because the bread flour absorbs a bit more liquid. 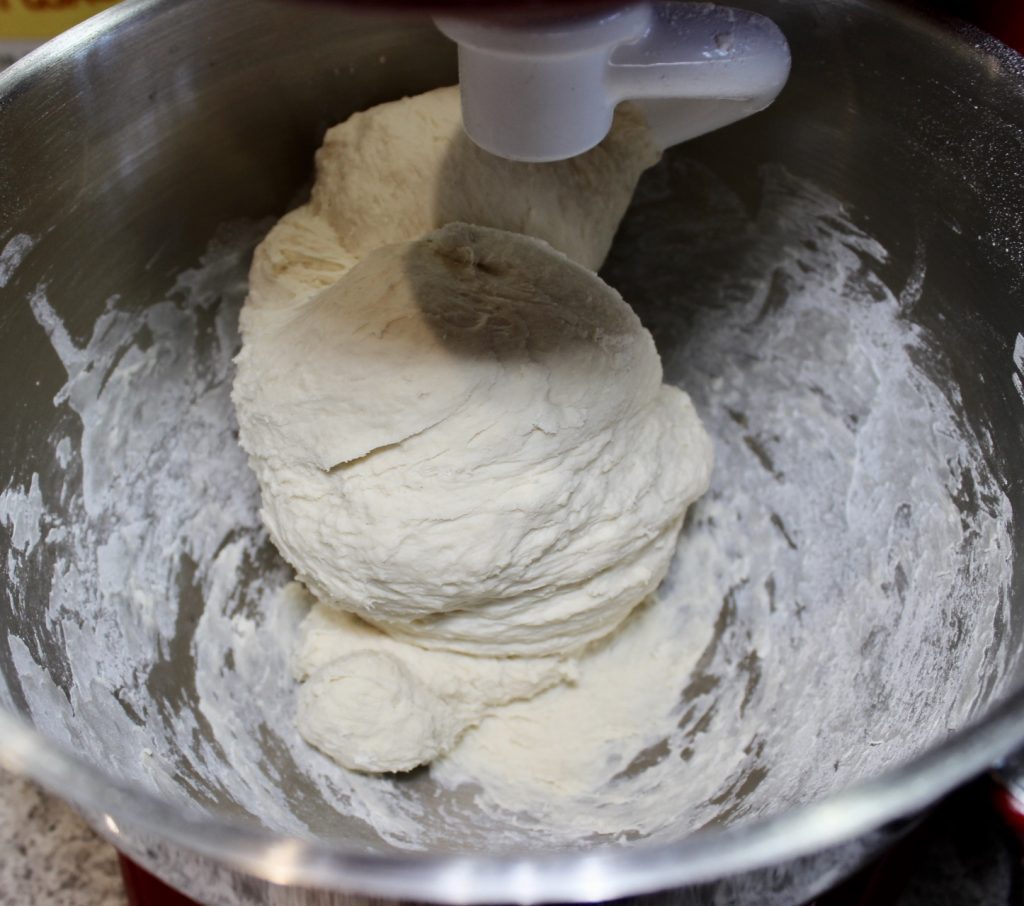 The amount of flour can vary depending on factors such as humidity, how well it’s sifted and just plain randomness. Look for the dough to have a smooth surface, then it’s ready to rise. Cover with a damp towel and let it rise until it’s doubled in size. This could take about an hour or up 2 hours. You want to keep the dough moist, otherwise it will form a crust on top and interfere with rising. If you leave the bowl in the oven with the light turned on, that’s the perfect place to let dough rise. Otherwise, make sure it’s not near any draft or cool air. 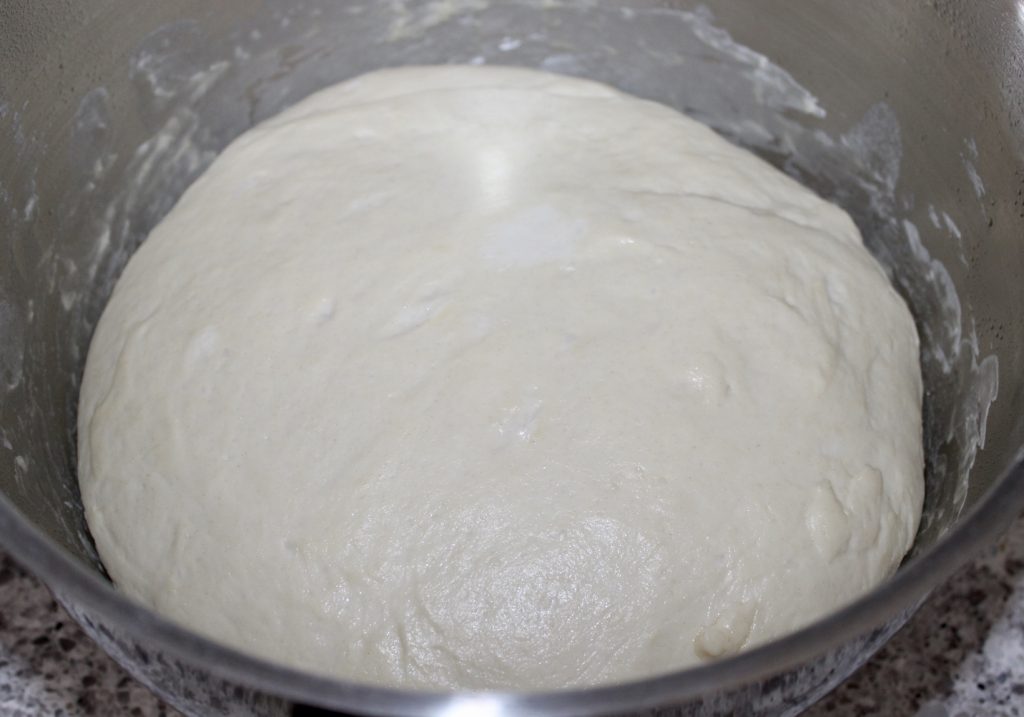 Once it’s doubled, punch the dough a few times to release air bubbles, then turn onto a clean counter dusted with flour.

Knead it a few times and cut into 4 equal pieces. 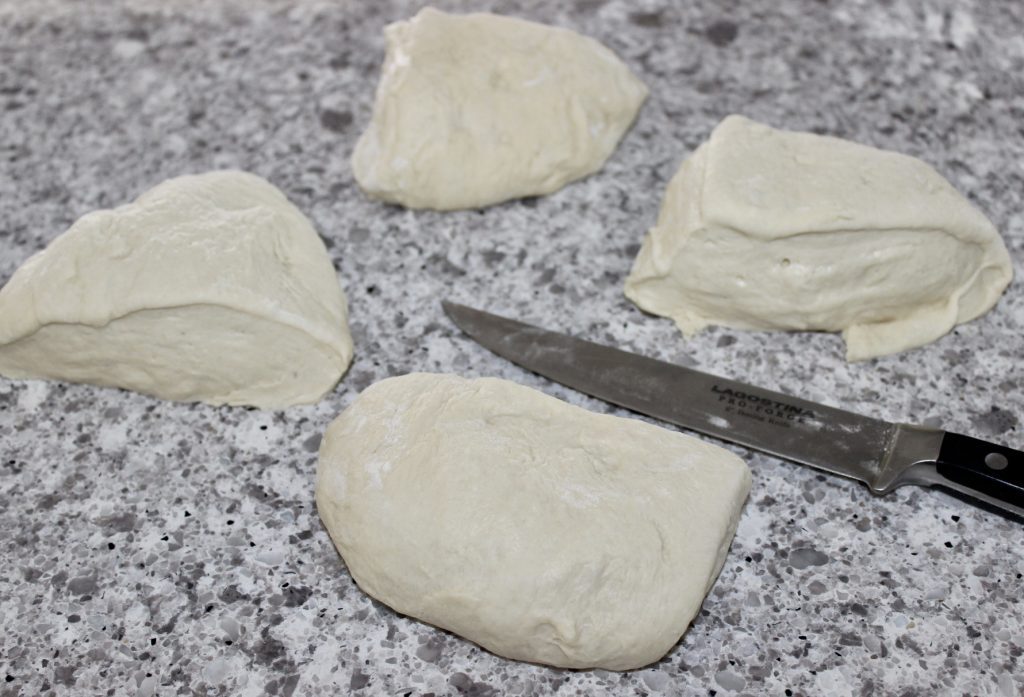 Now you just have to roll the dough into snakes, just like when you were a kid. Remember play dough? It was practice for bread making.

Use a rolling, squeezing, stretching technique and don’t worry too much about what they look like. You want them to be long and thin. Place them on a baking sheet and let them rise again until almost doubled. This will take around 45 to 60 minutes. Ish. The book suggests an oiled baking sheet but I’ve had good luck with parchment paper so if you have some, use that. 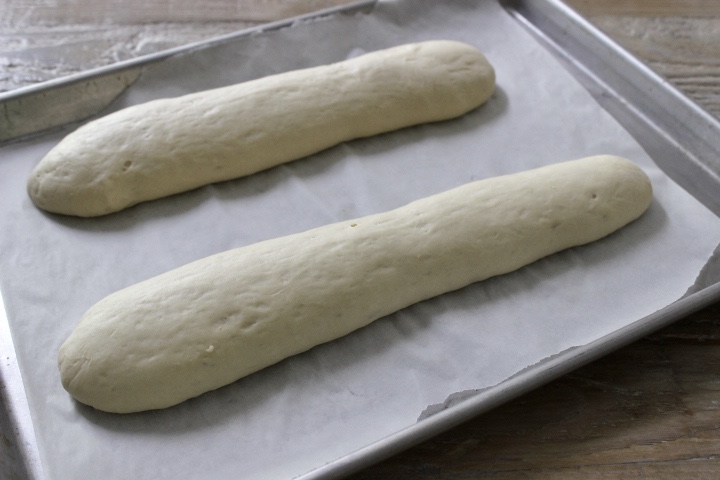 Once they’ve almost doubled in size, brush the loaves with an egg wash before baking to give the exterior a shiny golden finish. Give the loaves some slashes with a very sharp knife to ensure they rise evenly without splitting. 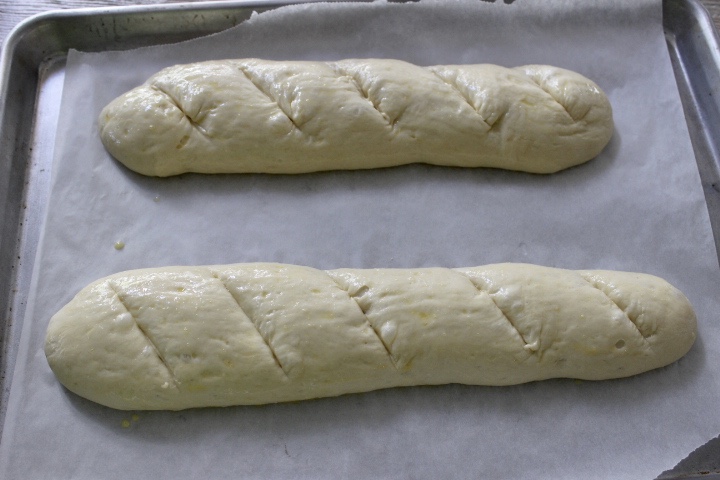 You’ll need 2 baking sheets to make 4 baguettes. Put an old pie plate on the very bottom of the oven under the lowest rack and fill it with water before you preheat the oven. The steam created helps give the bread a golden crusty exterior with a chewy interior.

Bake on the bottom and middle rack starting with a hot oven, then turning the heat down after 15 minutes. Switch rack locations when you turn down the heat.

These baguettes freeze well so you can eat some and save a few for another time. Once they’re defrosted, pop them in the oven for 5 minutes and they taste like freshly baked all over again. 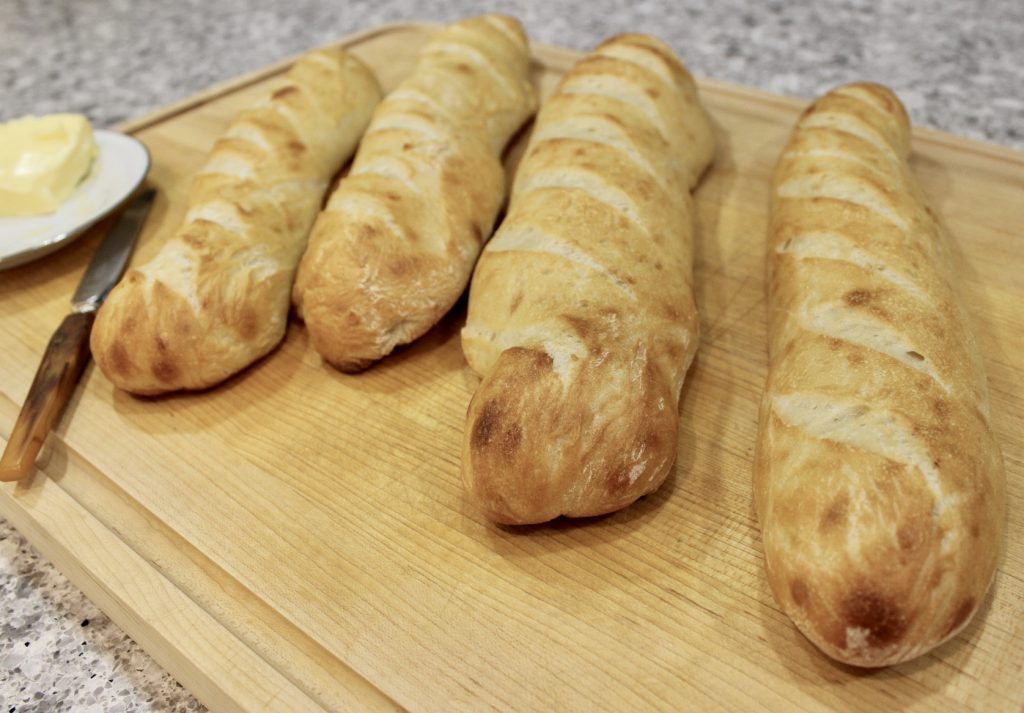 Homemade bread has none of the preservatives that store bought has so you’ll want to eat these within a day or two. And French Baguette has far less salt too. So go ahead and enjoy some without guilt. 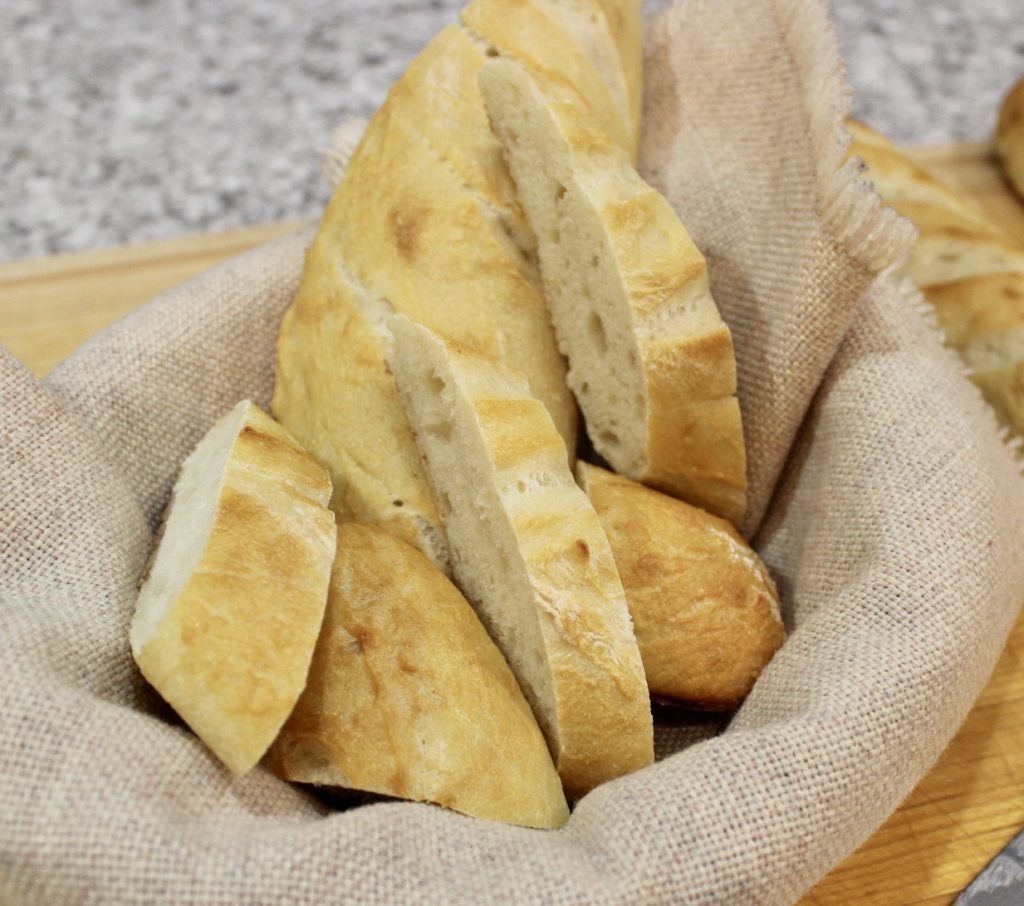 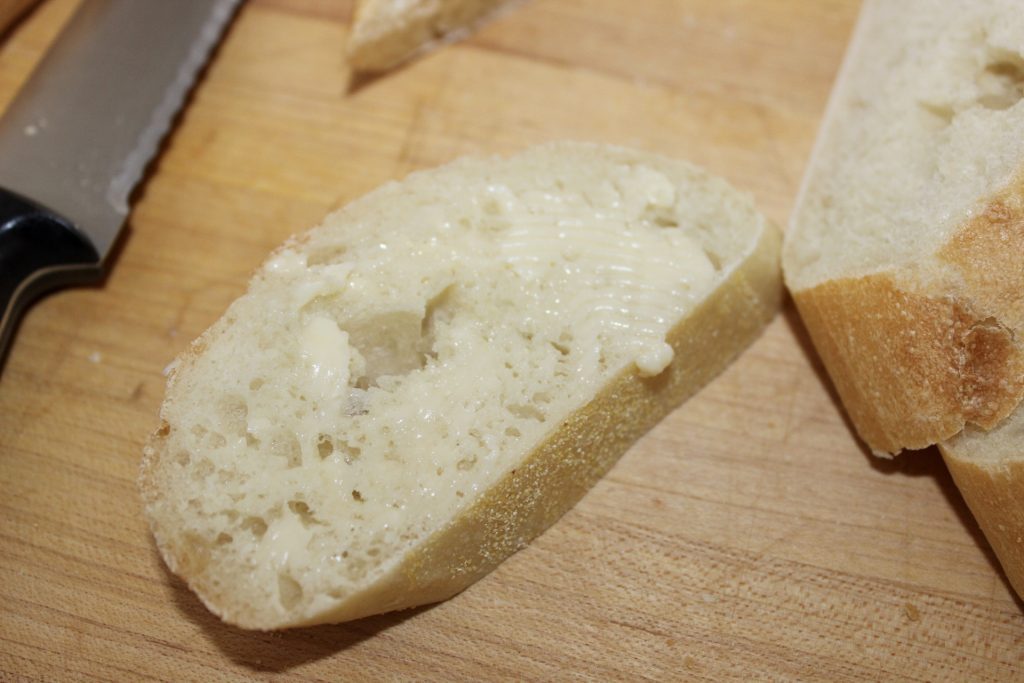 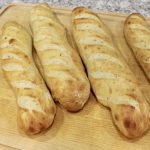