I just saw a new product in the grocery store. It’s a frozen Chicken Pot Pie from a certain chain restaurant that sounds like a ski cabin in the alps. I asked one of the staff about it and she said it’s really good. But then I thought a homemade version would be better and probably have a million less grams of sodium. The next day, coincidentally, my neighbour Rob brought over a Pheasant Pot Pie he’d just taken out of the oven. It was incredible. So I’m totally copying his recipe.

You don’t have to go out and shoot any pheasants for this because chicken or turkey will work just fine. Leftover cooked meat is easiest but you could also cook a few chicken breasts if you wanted to. This version of Chicken Pot Pie is actually more like upside down Chicken à la King because it isn’t pie shaped and it has no bottom crust. Instead, it’s a thick hearty chicken stew topped with crispy buttery puff pastry. Kind of like Steak and Guinness Pie with poultry instead of beef.

The secret to making sure the stew isn’t too runny is to make sure you use lots of vegetables and generous chunks of meat. And simmering the sauce for a while will naturally thicken it without having to use a bunch of flour or cornstarch. The basis to every great soup or stew is a Mirepoix.  Basically, you’re slowly cooking onion, celery and carrot in fat to create a flavour base. Instead of sautéing the vegetables, cooking them slowly releases the natural sugars so they’re soft and fragrant. I’ve intentionally cut the carrots larger than the onion and celery because I wanted the carrots to be a vegetable (and colour) component of the dish instead of just something hiding in the background.

I like mushrooms in Chicken Pot Pie so I added some to the vegetable mix. Since they have a high moisture content, cooking them first with the other vegetables releases some of the liquid so you don’t end up with diluted sauce.

Once the vegetables are softened, sprinkle some flour or cornstarch over the mixture and stir and cook for a few minutes, then add liquid. I use a combination of milk and cream combined with chicken stock so it’s extra creamy. But you can use just milk. And, adding an extra spoonful or cube of dry chicken stock enhances the depth of flavour. Stir over medium heat until the sauce thickens. Make sure to season with salt and pepper to taste, keeping in mind that some broths have more salt than others. Also, add some fresh or dried thyme. Dried herbs have more flavour but fresh herbs have better colour and, well, a fresh flavour. Add some chopped parsley too. Now simmer for about 15 minutes, stirring occasionally.

Add lots of chopped cooked chicken. Since it’s already cooked you don’t need it to cook any longer and it will heat while the dish is in the oven. The recipe calls for 2 cups but you can add more, up to 3 cups depending on how much leftover meat you have.

The peas will lose their green colour if you cook them for too long so don’t add them until the end. Pour the stew into a wide baking dish. You want to make sure you have at least an inch of room at the top, otherwise it will bubble over and you’ll have to clean your oven.

Now get the puff pastry ready and preheat the oven.

You can buy puff pastry in a roll that’s ready to use. Or, you can buy it in blocks that you roll out. Either is fine. If you have to roll it out just sprinkle a little flour on a clean dry surface and roll from the centre outwards, rotating the pastry so you end up with the right shape.

Pro tip – you can roll the puff pastry between two sheets of parchment paper for easy clean up. But, the paper will slide around so you may have to anchor it some how – I actually let the paper hang over the edge of the counter and used my body to hold it in place. It might’ve looked funny but it worked. 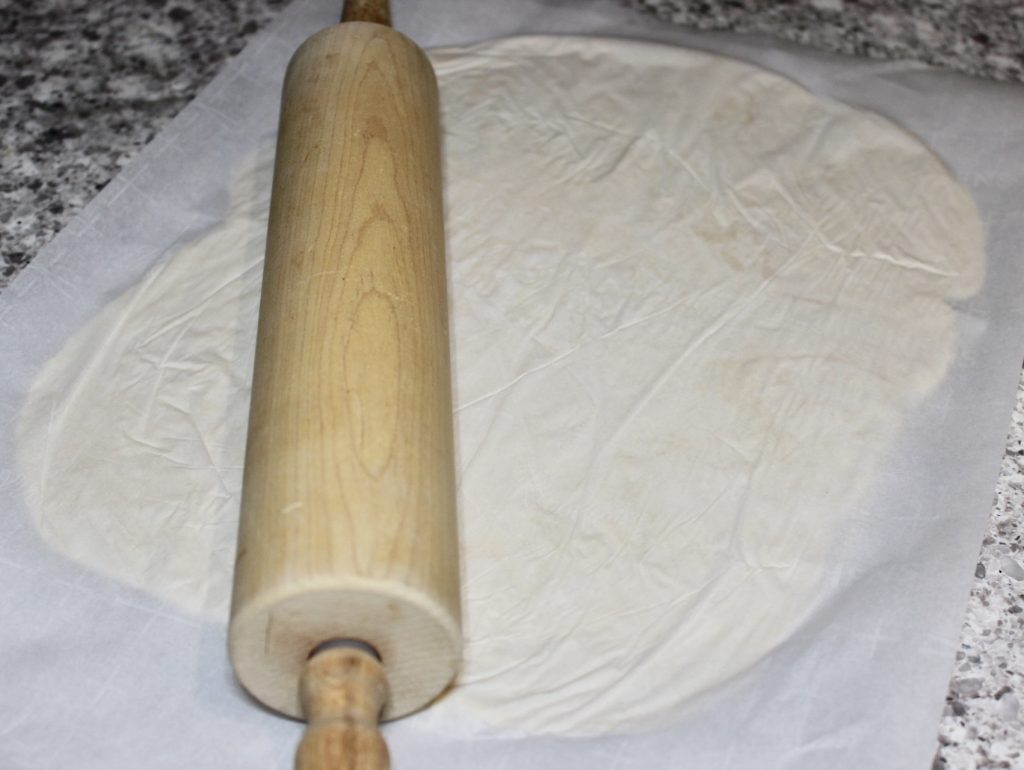 Flop the pastry over the dish of stew and trim any excess pastry. Or scrunch it or fold it. It doesn’t matter. The beauty of Chicken Pot Pie is it’s a rustic dish so it doesn’t have to look perfect.

But, if you score the top in a criss cross pattern with a sharp knife it looks really nice. And, brushing an egg wash over top before cooking gives it a shiny golden colour. Since the filling is still warm you just need to cook it until the pastry is puffed up and golden. You’ve got a complete meal in one dish so you don’t have to serve this with anything. Just dig in. For an alternative idea for topping your Chicken Pot Pie, try Buttermilk Biscuits.