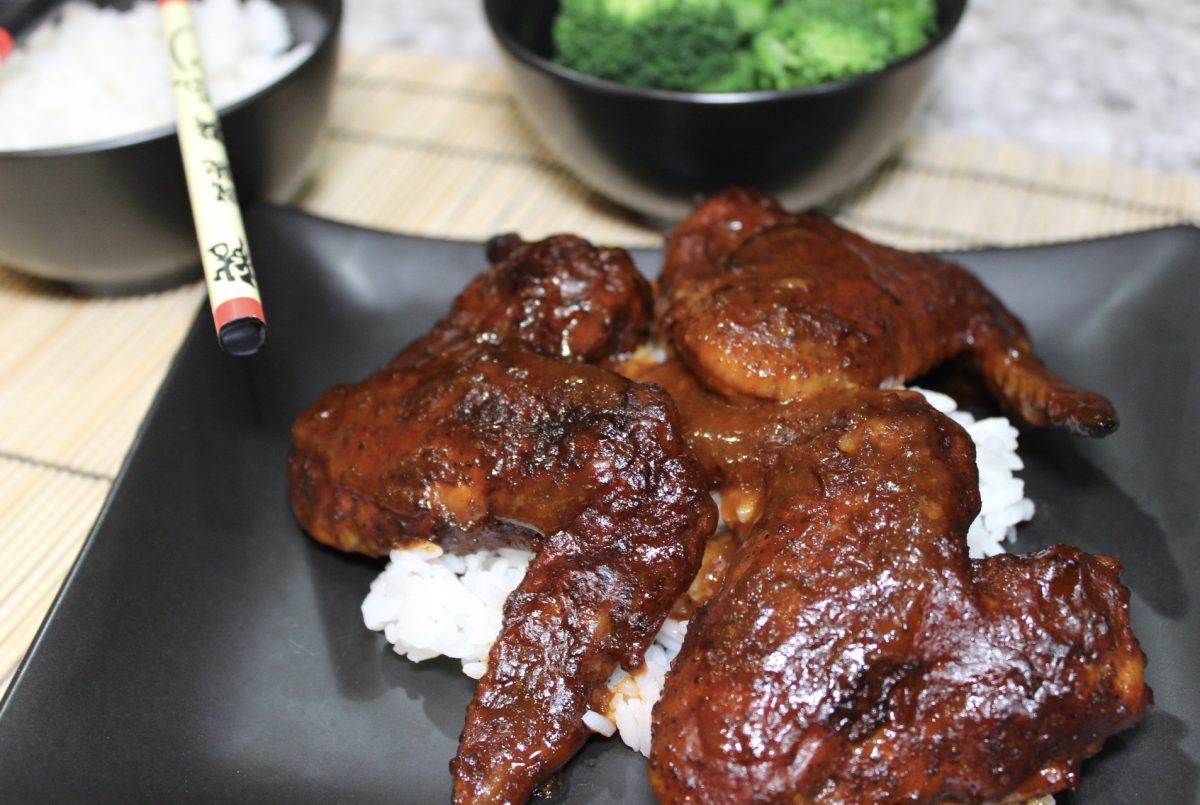 I’m pretty sure there’s nothing authentically Cantonese about these wings, but my mom has been making Cantonese Chicken Wings since we were kids. It’s a great recipe with just a few common ingredients but the result is tasty zesty tender wings. I’m guessing this is one of those women’s magazine recipes but don’t be fooled by the basic ingredients. The flavours really work together. I promise, you won’t be disappointed.

WAY back in the day, chicken wings were cheap. Once the good parts like the legs and breasts were cut off, the wings were the pieces no one wanted. They were good for soup, but that was about it. My mom was amazing at creating meals on a budget and she could feed our family of 6 some pretty delicious meals without spending a fortune. Including this one. 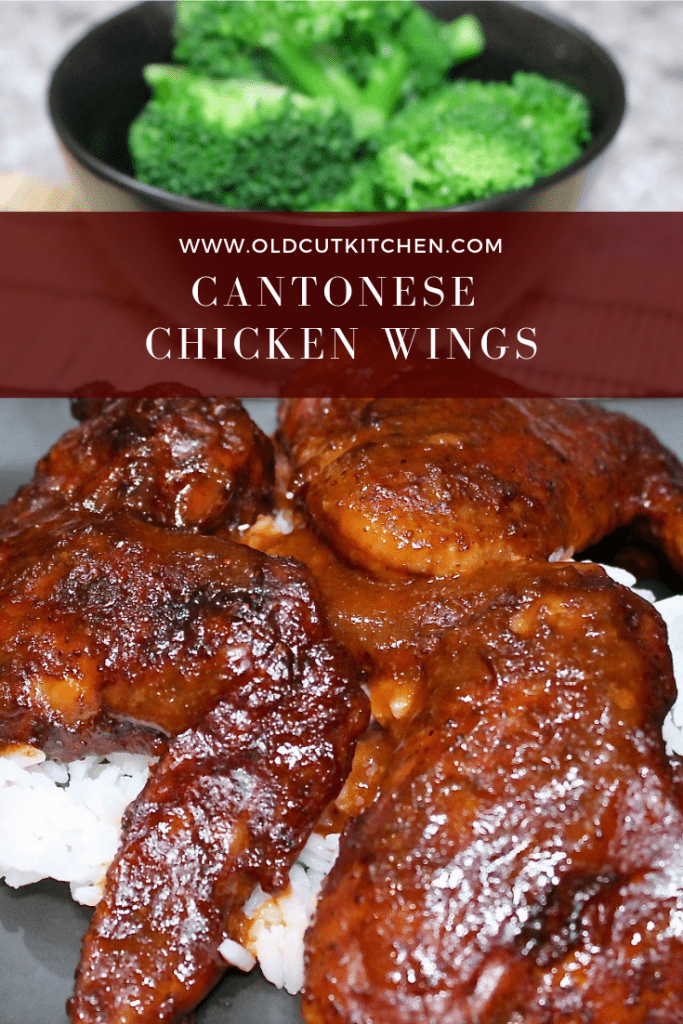 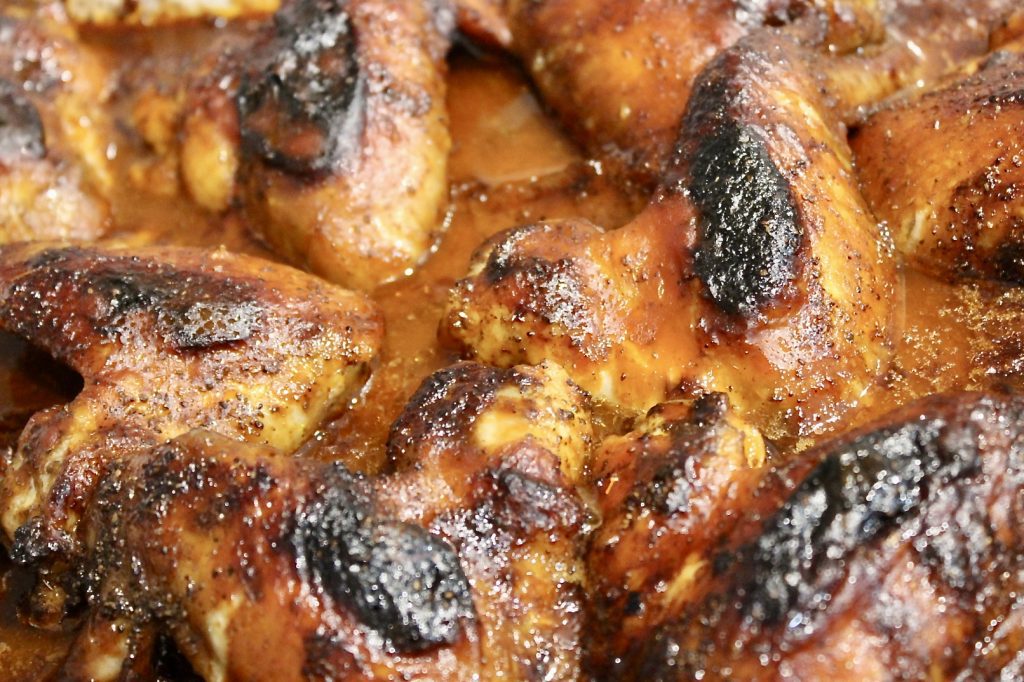 We all still make many of mom’s recipes. Except liver. None of us ever cook liver.

Now that chicken wings are popular they’re expensive and not always available. I don’t mean the tiny wing pieces that are mostly skin and bones. I’m talking about real full chicken wings. If you can’t find them you can make this with thighs or small drumsticks. I often do. But in keeping with the original recipe, I’m using real wings. They can vary in size so hopefully you can find some that aren’t too small.

The most important step is getting as much fat out of the skin as possible. This takes some patience but it’s worth it. Mix together oil and soy sauce. Well, mix as well as you can but you’ll see that they don’t combine well. Use cooking oil, NOT olive oil. You’re going to be searing the skin under the broiler and olive oil can’t withstand high heat as well as other oils. Canola or vegetable oil work well. You have to literally blacken the skin.

Brush the oil mixture over the wings, both sides. Arrange the wings in a baking dish with the outer skin side up.

Sprinkle brown sugar over the wings. The sugar helps give the skin that charred look. Then mix the celery seed and chili powder together and sprinkle over the chicken, reserving part of the sugar and spices for the other side. 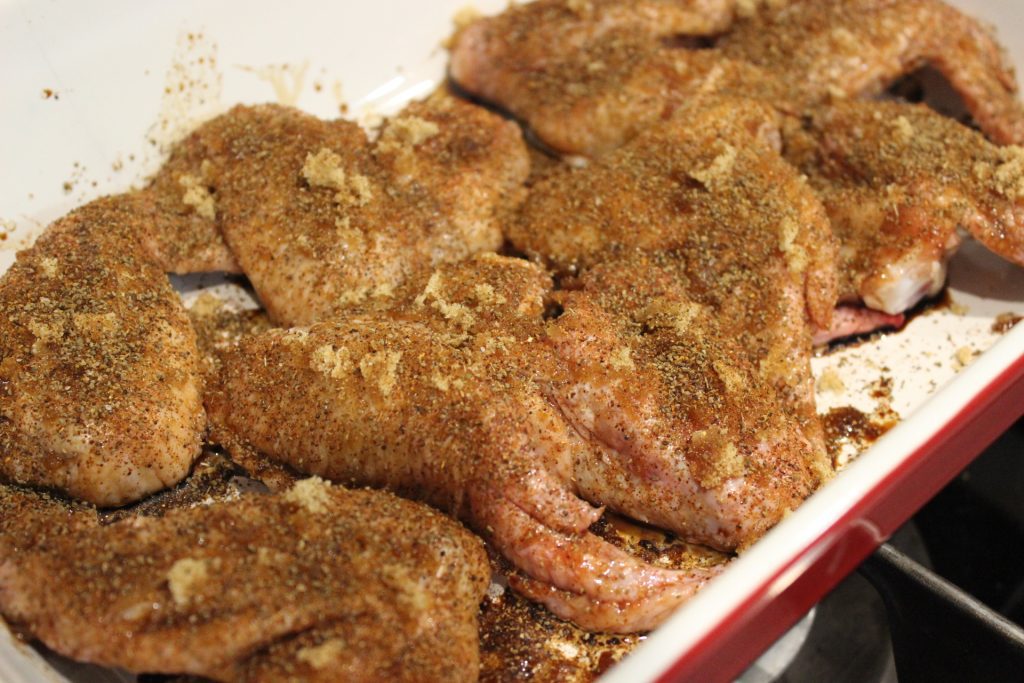 Broil the first side until the skin starts to char in places. You probably want to have your hood fan going for this. Keep a close eye on them.

Turn the wings over and sprinkle the remaining sugar and spices over top. Broil again until they’re sizzling and blackening. Use the middle rack or a little higher but not right under the broiler so you don’t burn down your house. You may have to move them around at different angles to get the best position for ultimate blackening.

This takes maybe about 10 minutes on each side. But trust me, the results are so worth it. 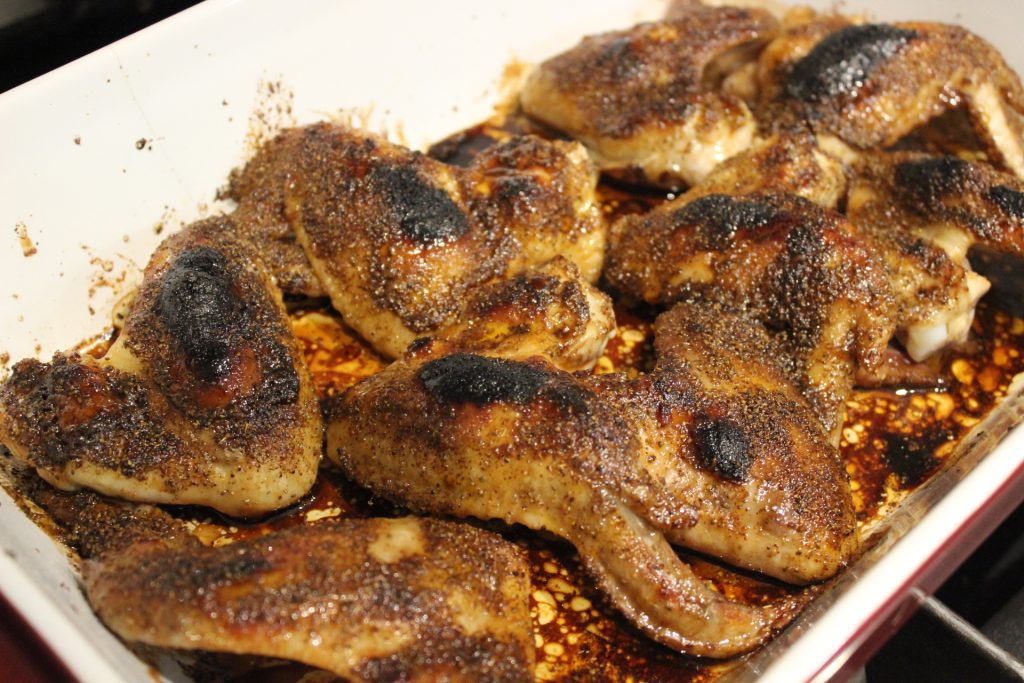 Meanwhile mix together tomato soup and vinegar. Yup, that’s the sauce. If you like a spicier sauce, add some Sriracha if you like. When you pour it over the wings, it mixes with the other ingredients and incorporates the flavours. And don’t be alarmed by the colour, it looks better once it’s cooked. Give the sauce a bit of a stir to incorporate the spices and oil at the bottom of the pan. 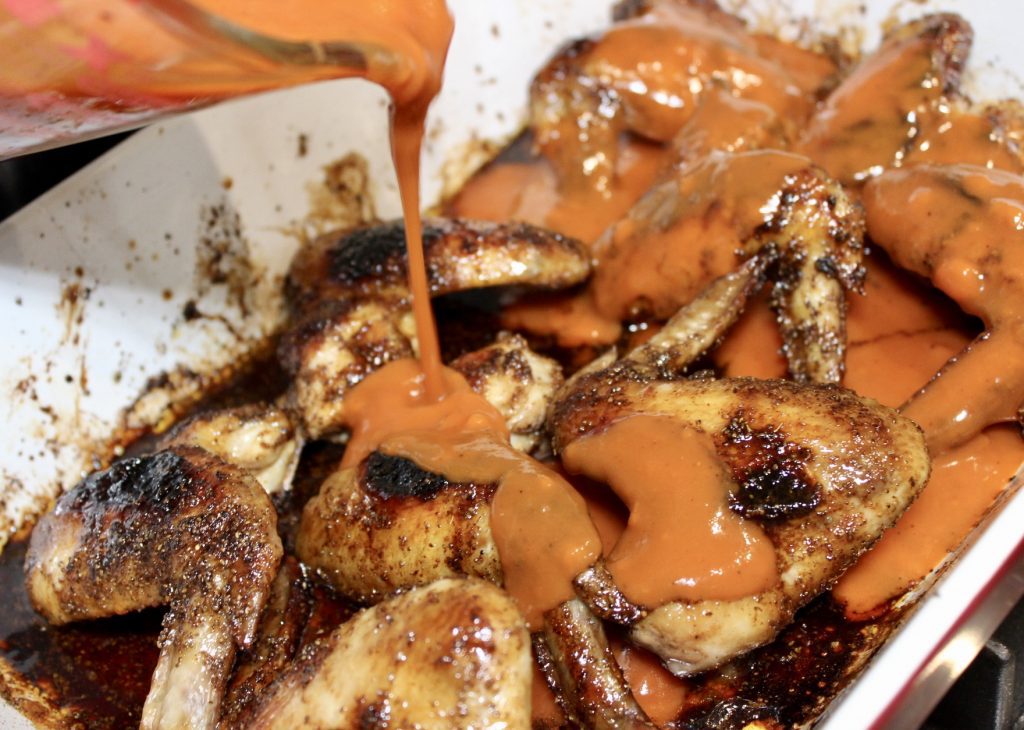 Turn the oven down to 325 and bake for 40-45 minutes. Uncovered. The sauce will thicken as it reduces but you’ll still have some in case you serve this with rice. I recommend it. 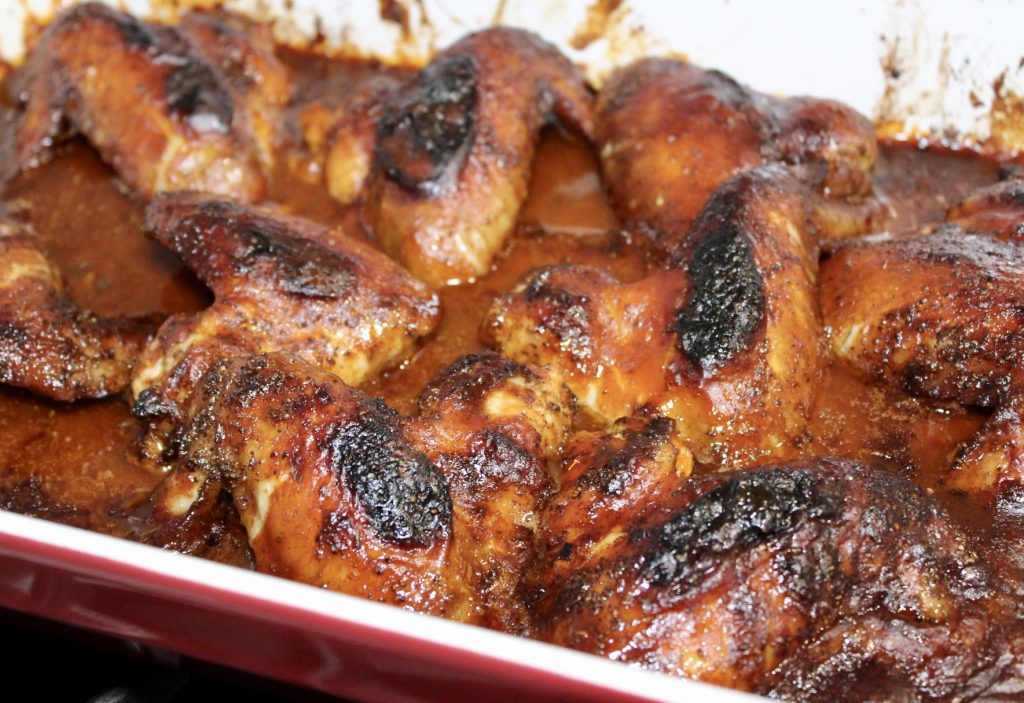 The meat will fall off the bone and the blackened skin is the best part.

Serve over rice. Then you get to eat more of the delicious tangy sauce! 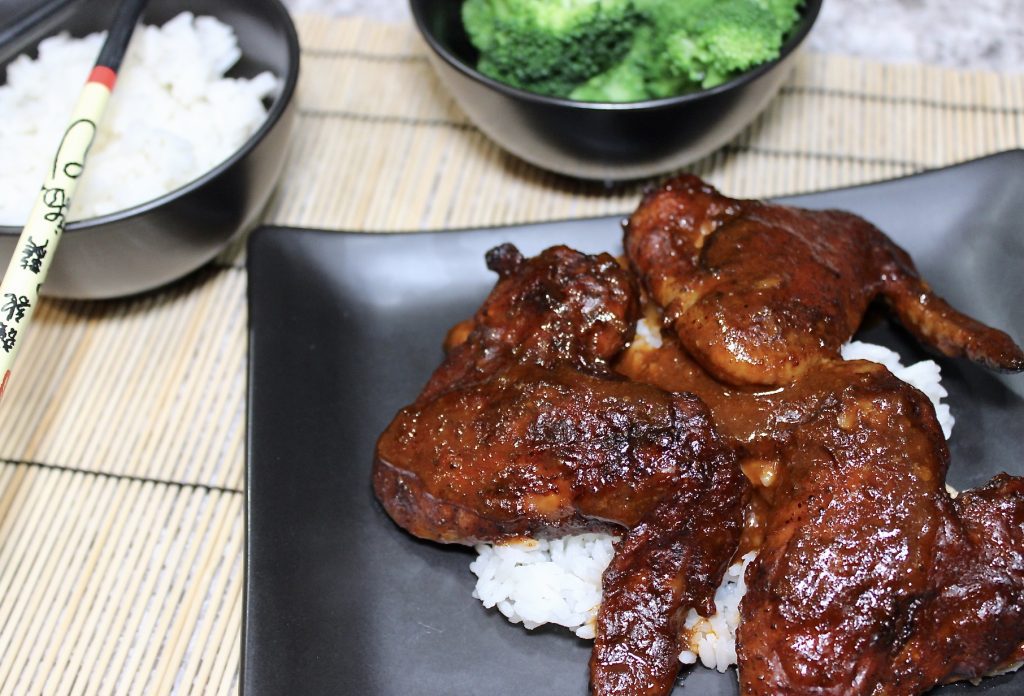 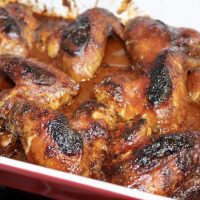