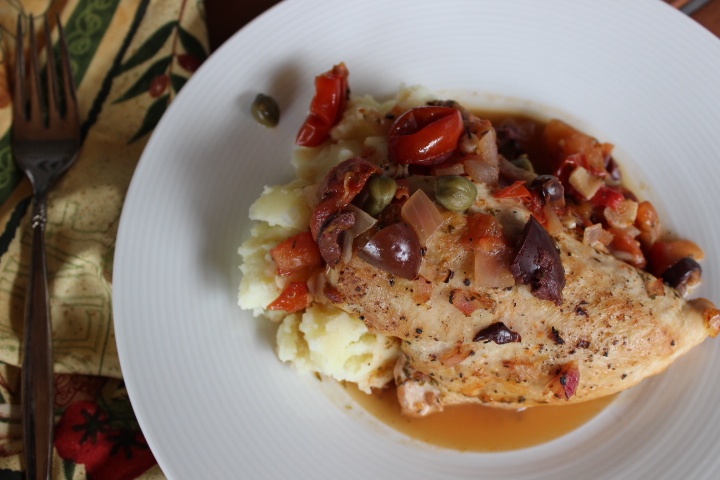 Boneless skinless chicken breasts can be dry and boring. Mediterranean Chicken Breast has so much flavour and is not dry because it’s simmered in a sauce of roasted tomatoes, briny olives and capers. It’s a drool worthy dish you’ll want to make again and again.

I know I sound like a broken record because I’ve said this before but tomatoes don’t usually have great flavour unless they’re in season. Sure, they look nice on display in the grocery store in the middle of winter but if you taste one of them along side a fresh picked vine ripened tomato you’ll know what I mean. That’s where cherry tomatoes come in. Or grape. Or mini San Marzano. The little guys seem to have the best flavour and roasting them is what gives Mediterranean Chicken that intense flavour. You don’t need to use all small tomatoes but at least half should be a smaller sweeter variety.

Then there’s the olives. Salty briny olives. I love the colour and flavour of Kalamata olives so I prefer them in this dish but if you’re not a huge fan of the intense briny tang you can use a more common olive like green or pimento stuffed manzanillas. I wouldn’t recommend canned black olives because they tend to be too soft and don’t have the brine that makes Mediterranean Chicken so good. 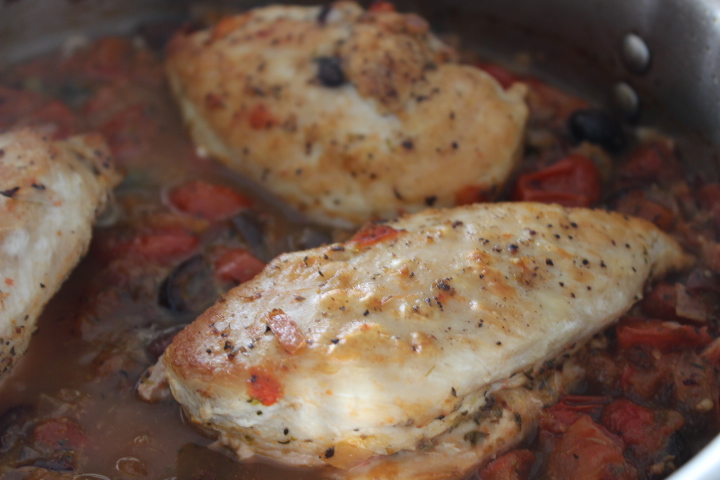 Whole olives are the best quality so the jars with sliced or chopped olives are probably the ones that don’t make the cut. It’s true for canned tomatoes which is why I’m thinking so. Anyway, if you have olives with pits they’re fairly easy to remove, especially Kalamata because they’re a bit softer than a green olive. Lay them on a cutting board and squash them with the flat side of a large knife. Watch out because sometimes you’ll get a squirt of juice. Then you can usually pull them apart and pull the seed out. We’re not talking about a large quantity of olives here so it’s worth the effort.

Capers. I can’t look at one without salivating. I was introduced to them by Mr. H when we were dating. Back when he was trying to impress me he took me to a nice restaurant and we had smoked salmon with red onion and capers. I was hooked. On the capers I mean. So what exactly are capers? They’re actually an edible flower bud from a Caper bush that are salted and pickled. You don’t need many to add a punch of flavour because they’re quite salty and intense. I can eat them right out of the jar but some may find them a little too strong. Honestly though, they work in this recipe so please try them! 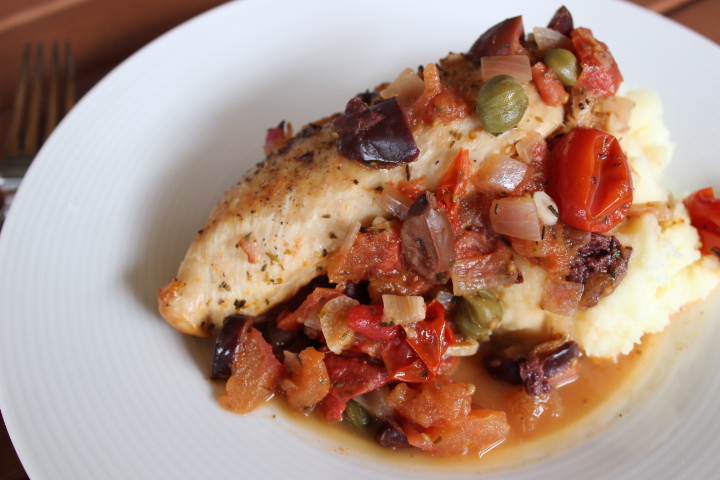 What doesn’t work in Mediterranean Chicken is Feta cheese. I mean, Feta really does compliment the flavours but it will just get lost in the sauce so if you really want some, make a Greek Salad to serve on the side.

Finally lets talk about the chicken. I have to admit, I almost always use bone in skin on chicken or when I don’t want skin and bones, like in Butter Chicken I use thighs. The problem with boneless skinless chicken breast is that they easily dry out. So give them a quick sear in the pan, just long enough to add some colour, make the sauce, add the chicken back in and spoon some sauce over top. Then finish the Mediterranean Chicken in the oven, covered. And don’t overcook it, even though it’s covered with sauce and baked in the oven, it can still dry out. 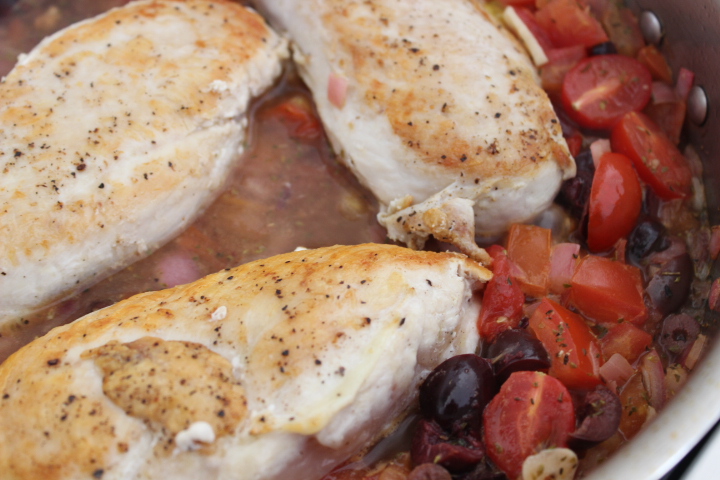 But by all means, you can totally make this with skin on chicken. Just make sure you sear it really well, skin side down to render off as much fat from the skin as possible. You’ll get lots of splatter and you’ll want to drain most of the fat before adding the other ingredients but it will definitely be just as awesome and you won’t have to worry as much about the chicken drying out. 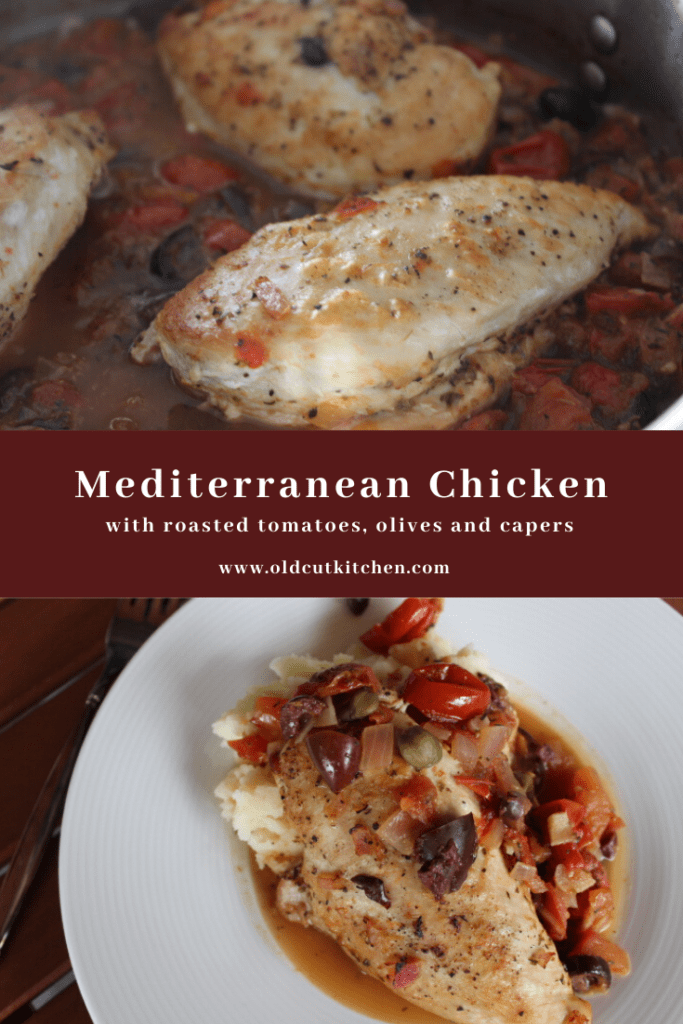 When you add wine to a sauce it’s important to cook it a bit to remove most of the alcohol. That way you get the flavour without it tasting “boozy.” Also the wine is a great way to deglaze the pan, meaning as it simmers it soaks up the bits left behind by the chicken and onion. If you don’t want to cook with wine you can substitute chicken broth. Once all the sauce ingredients are mixed in the pan, give it a taste. In most cases you would be seasoning with salt and pepper at this time but since the olives and capers are quite salty you likely don’t need any. It’s up to you though. The chicken is seasoned so that should be enough.

Here’s a trick for the sauce. If you find it’s a bit too watery after the chicken is cooked, remove the meat to a plate and cover with a loose foil, put the pan back in the oven uncovered and roast for 5 or 10 more minutes until the sauce has reduced a bit. Be careful not to over reduce because you want some sauce to spoon over the chicken. And be sure to serve Mediterranean Chicken over rice, noodles or, my favourite, mashed potatoes. 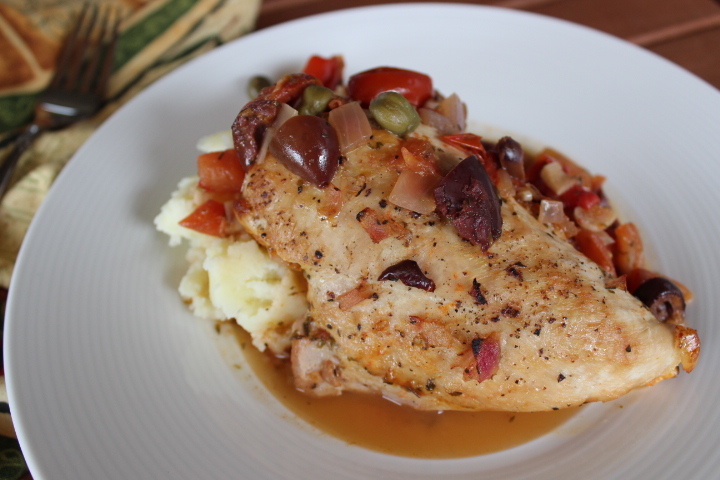