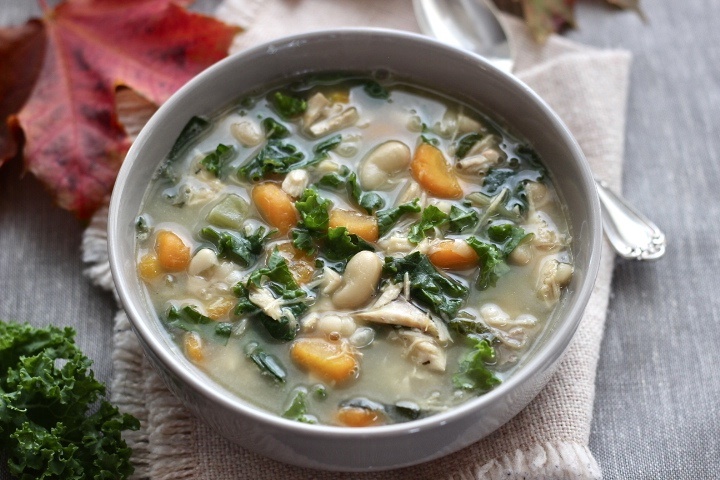 Don’t throw your turkey bones away after Thanksgiving or Christmas dinner. You’ve got the perfect base for homemade soup. Loaded with nutritious ingredients, Turkey Soup with White Beans and Kale is a great way to get back on track if you’ve been over indulging. But don’t let the healthy stuff fool you, this soup is also delicious and filling.

Let’s just talk about the healthy ingredients for a quick second, then get right into making the soup. We all know that turkey, or any meat for that matter, contains protein. But check out all these other health benefits! And since you’re making the broth with the turkey meat and bones, you’re getting the best type of soup base. Homemade. 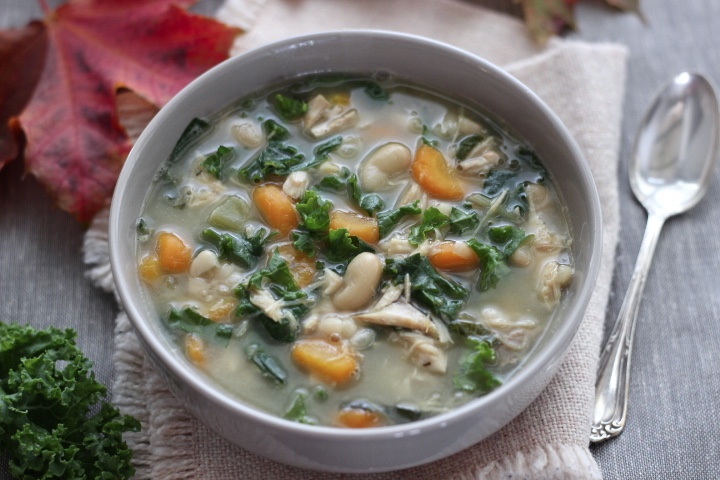 There are many different types of white beans. In this recipe, I’m using canned White Kidney Beans, or Cannellini beans. They’re larger and softer than other white beans and there’s no need to pre soak them. You do want to drain them well and rinse them though which will help reduce some of the sodium. Better yet, look for products with reduced sodium. White beans are best known for their protein and fibre.

Kale. Blech. I can hear you. I don’t disagree. But the reason it’s referred to as a superfood is because it’s literally loaded with vitamins and minerals. Kale is a member of the cabbage family and when chopped and added to the soup right before serving, adds a nice bright green element. You could substitute other chopped greens like Swiss chard or spinach if you like. 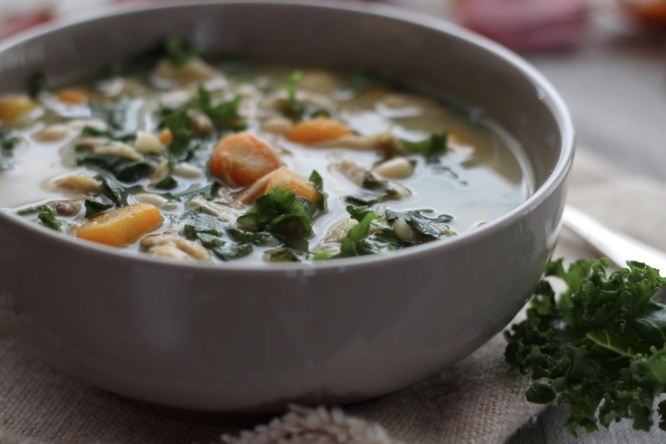 OK, enough of the boring nutrition stuff, I don’t want to scare anyone off. Turkey Soup with White Beans and Kale is really tasty. And it’s not hard to make. As long as you have some of the bones left from a roasted turkey and some meat left on the bones, you’re good to go. You don’t have to measure the ingredients carefully, I’ve used “ballpark” amounts in this recipe. 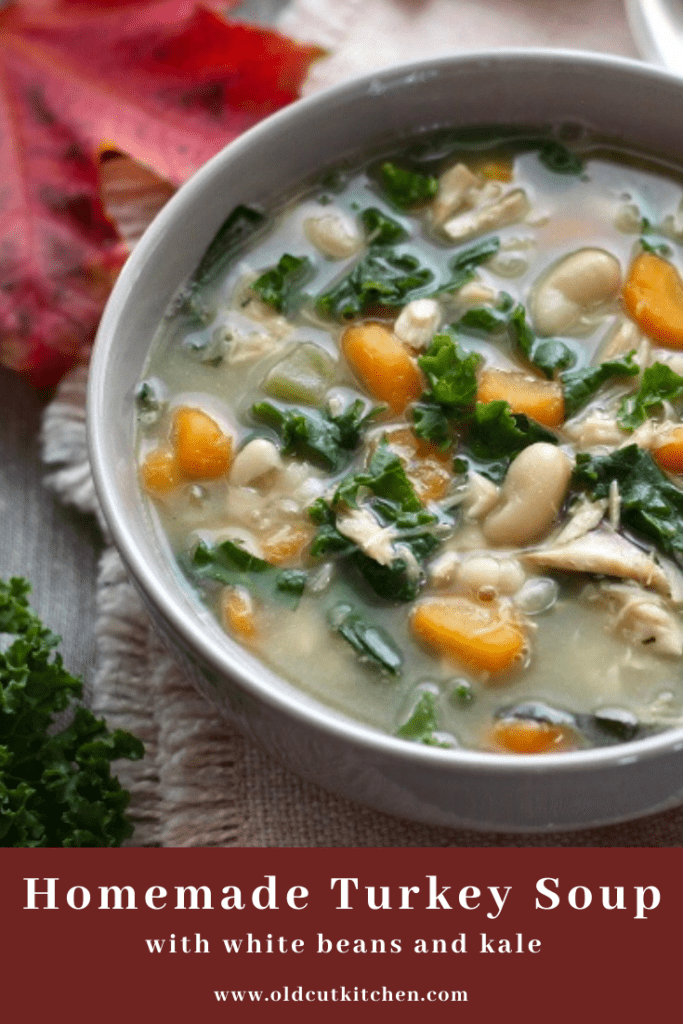 How to make homemade turkey broth

If you’ve got a small turkey you can drop the whole thing in a big pot and simmer it to make homemade turkey broth. Or, take the legs, wings and any larger pieces that still have some meat and toss them in a big pot. Either way, cover or mostly cover with cold water. Use about 12 cups of cold water. Drop in a few bay leaves and simmer away, partly covered for about 3 hours. The flavour will infuse into the broth, the volume will reduce and the bones will break down slightly. You can also add a stalk of celery and a few outside layers of onion. No need to cut them up.

You can also use a slow cooker. In fact, many are oval shaped so the turkey fits pretty good in there. But you need to leave it in there at least 8 hours because it takes longer to break down.

Once your broth is ready, pour through a strainer into a clean pot. When the meat and bones are cool enough to handle, pick off all the meat you can find and discard the bones etc. Chop any pieces of turkey that are large and hopefully you end up with about 3-4 cups. You can finish the soup right away or put the strained broth in the fridge over night. Letting the broth get cold allows any fat to solidify on top and can be easily removed. But if you remove most of the fatty skin from the turkey before making the broth you probably don’t have to worry it. This step can’t be skipped if you’re making Ham and Split Pea Soup because there is a lot of fat on a ham bone!

You want about 8-10 cups of broth to make Turkey Soup with White Beans and Kale. If you’ve got more than that, save some broth for another time. It freezes well. Or you can just make a larger pot of soup. Just increase the amount of veggies and turkey. This soup freezes well, just like the broth. The kale will lose its vibrant colour though.

When you’re ready to finish the soup, cut up onion, celery and carrots. Add them to the broth along with your leftover chopped turkey and bring to a simmer. Taste and season with salt. Save adding pepper until serving because sometimes it makes the broth cloudy or discoloured. If you find your broth doesn’t have enough of a turkey flavour, add a cube or package of chicken bouillon. Drain and rinse the white beans and add them too. Let it all cook together for at least 30 minutes, up to an hour.

Then, rinse and chop up the kale and add right before serving. Kale cooks quickly in the soup and keeps its bright green colour longer than other greens. Basically once it’s heated through the Turkey Soup with White Beans and Kale is ready to serve. 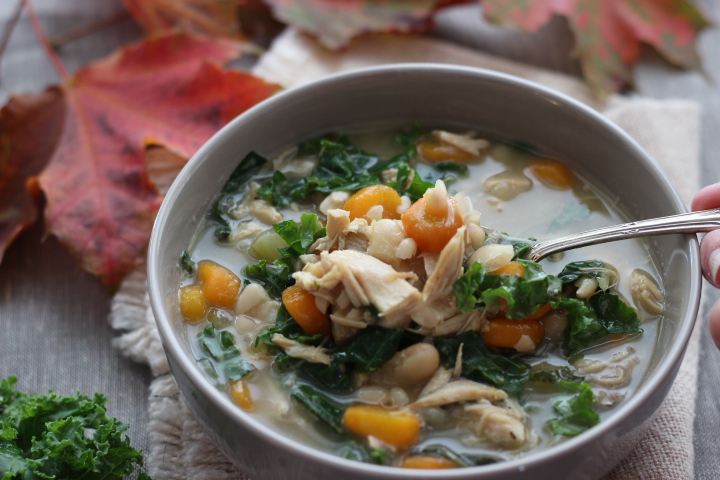 2 thoughts on “Turkey Soup with White Beans and Kale”