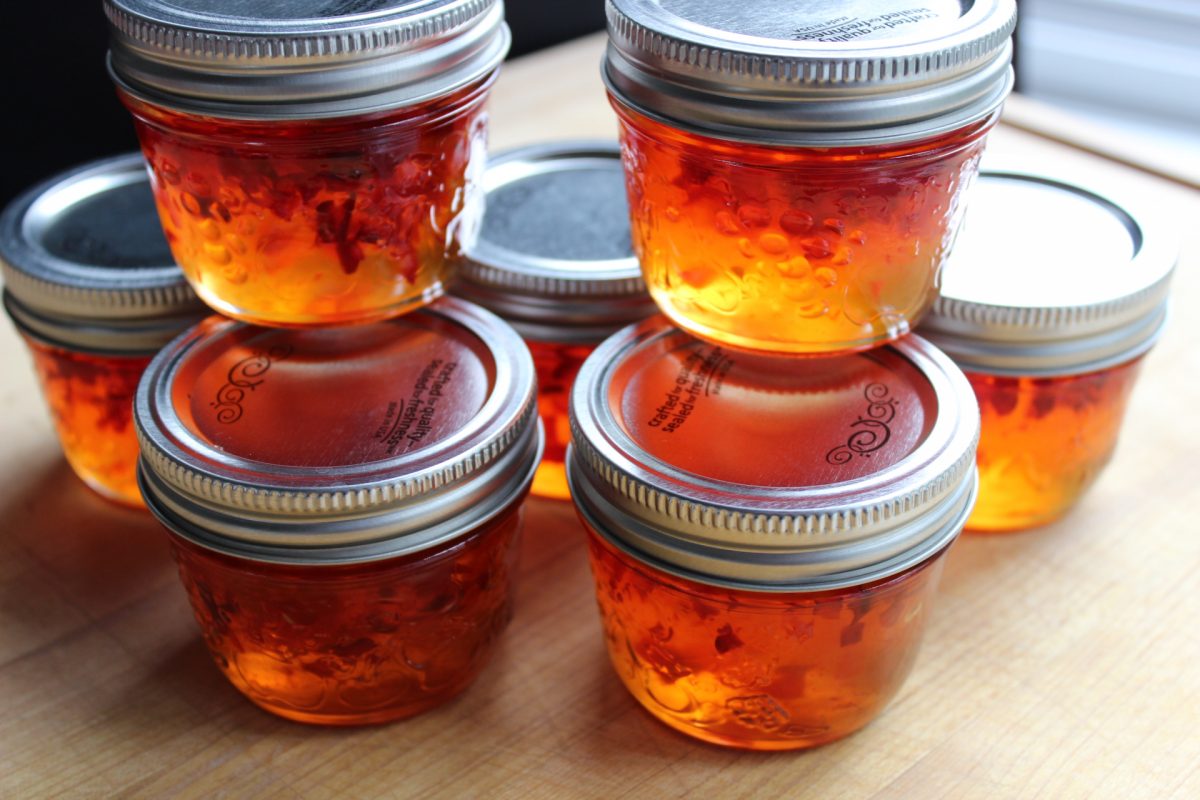 If you’ve got an abundant harvest of hot peppers, making your own Hot Pepper Jelly is a popular and tasty way to preserve those beautiful red peppers. You can make little jars and give them as gifts, and if preserved properly they will store for ages in your pantry.

My parents are avid gardeners and one year they planted a bunch of “cherry bomb” peppers. They had an abundant harvest and were using all kinds of methods to preserve them. After chopping, freezing and drying, they had to throw out one of the pans they used because every time my mom used it after that, whatever was cooked in the pan was suspiciously hot.

But the best thing they made was Hot pepper Jelly. 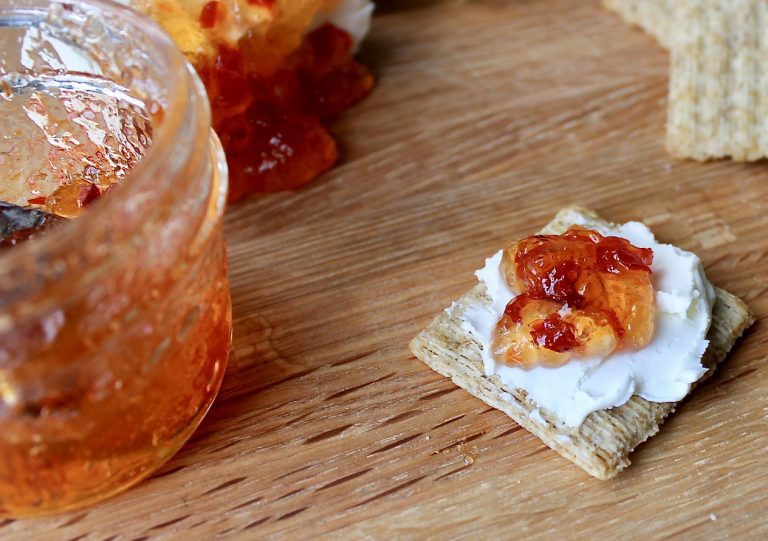 The first time I made Hot Pepper Jelly it had no heat and the peppers all floated to the top. Hot peppers are funny things. Sometimes they’re so hot you can hardly eat them and sometimes they have no heat at all. You can make a mild version of this by using only sweet peppers but then it wouldn’t be Hot Pepper Jelly, would it? But if heat isn’t your thing, it’s still awesome on crackers and it makes a great glaze for ham or roast pork.

I used Ricardo’s recipe for the basis of this Hot Pepper Jelly recipe and modified it to make it hot. I then added some tweaks of my own and now it’s our go to recipe. Just like making Salsa, it’s fun to get together with a friend and make a big batch.

How to make Hot Pepper Jelly

The hot peppers will burn your fingers so use gloves when you’re cutting them up. I keep a set just for use in the kitchen. Use the tip of a knife to scrape out the seeds and membrane. Save some seeds if you like, they look nice in the jars and are a visual reminder that it’s hot stuff. And make sure you wash your hands really well after you’re finished cutting the peppers. You’ll only forget to do that once. Trust me.

Make the pepper jelly in a large heavy pot because the mixture may bubble up and expand.

A modification I made to my original recipe was to add just the hot peppers to the sugar and vinegar mixture first and purée with an immersion blender before it got hot. For 2 reasons. First, it ensures the hot peppers are in very small pieces. Which is helpful when you’re trying to finely dice them with floppy gloves. It doesn’t matter if you don’t have perfect tiny cubes. And secondly, the jelly takes on the red colour of the peppers. The reason you want to do this before the jelly gets too hot is in case it splashes a bit, which creates a huge mess and could burn you. Immersion blenders are great but they do require some practice. You can totally skip this step, but I was glad I tried it. 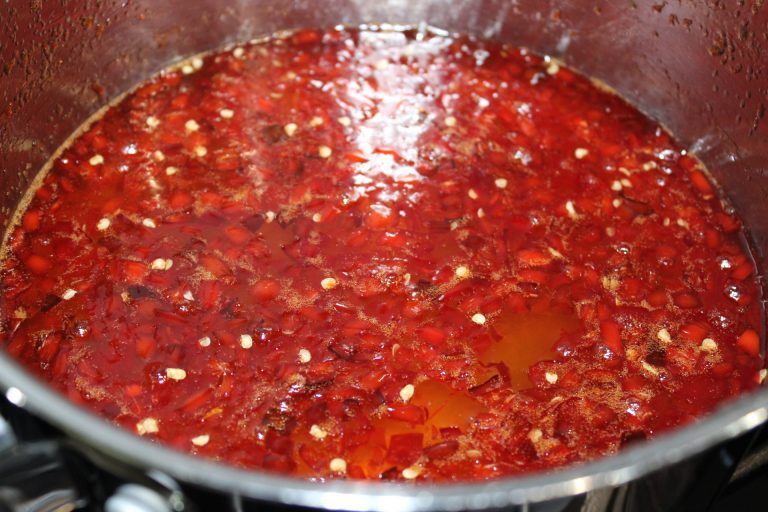 Add the sweet peppers and bring the mixture to a boil. Reduce the heat but let it simmer for 15 minutes. The peppers actually shrink a bit when cooked so don’t worry if your peppers aren’t as small a you wanted.

The fifteen minutes cooking time is when you can get your jars, lids and boiling pot ready. For the sake of safety, you need to sterilize everything. The easiest way to do this is to wash your jars in the dishwasher and fill them while they’re still warm. Otherwise, use your canning pot to boil the jars for a few minutes and heat the seals and rings in a wide shallow pan.

I have discovered recently that some instructions on lids and seals now say you don’t need to boil them first. In fact boiling could affect the rubber and impact negatively the proper seal so that does make sense. I made a batch without heating the lids and they all sealed perfectly. So this step isn’t mandatory but if you want to ensure you get a good seal, you can heat them a bit before topping the jars but don’t boil them.

These tiny jars are perfect for giving Hot Pepper Jelly as gifts. 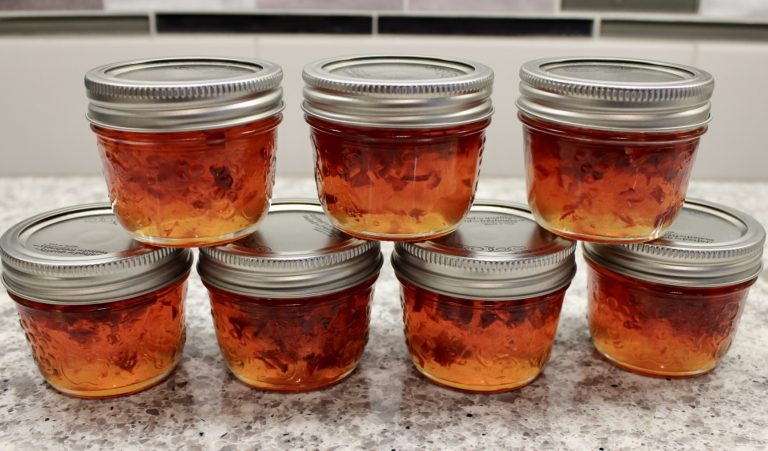 Always use new seals when you’re canning. Don’t tighten them too much. 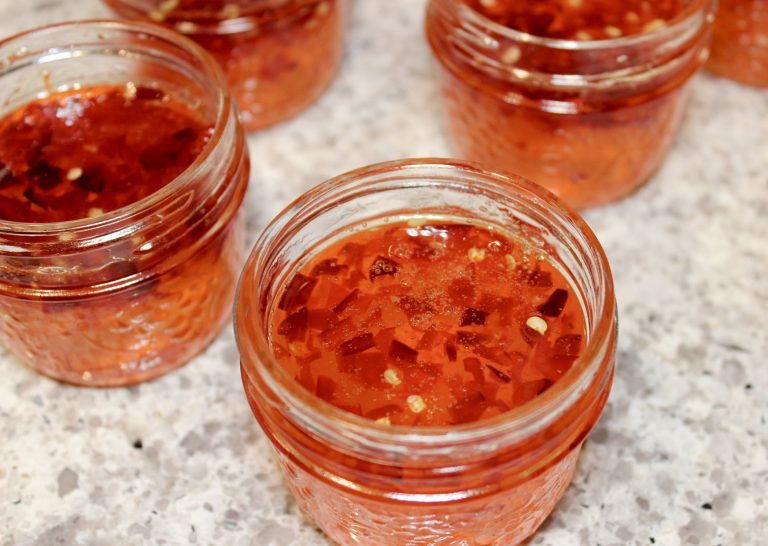 How to preserve Hot Pepper Jelly

Finishing them in a hot water bath ensures there’s no bacteria left behind and keeps them properly sealed so you can store them in the pantry for months. You need a large canner or double boiler. Carefully lower the jars into boiling water until they’re immersed about an inch below the surface.

Since they’re tiny jars you really only need about 5 minutes. 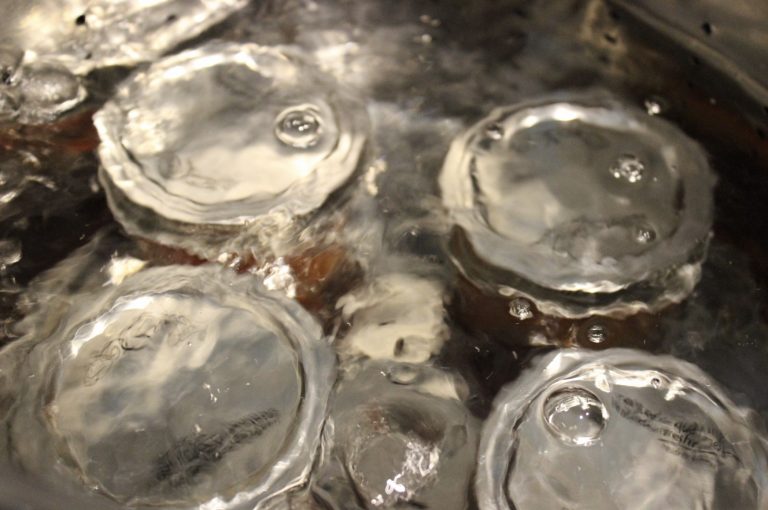 The peppers tend to float toward the top but that’s ok. 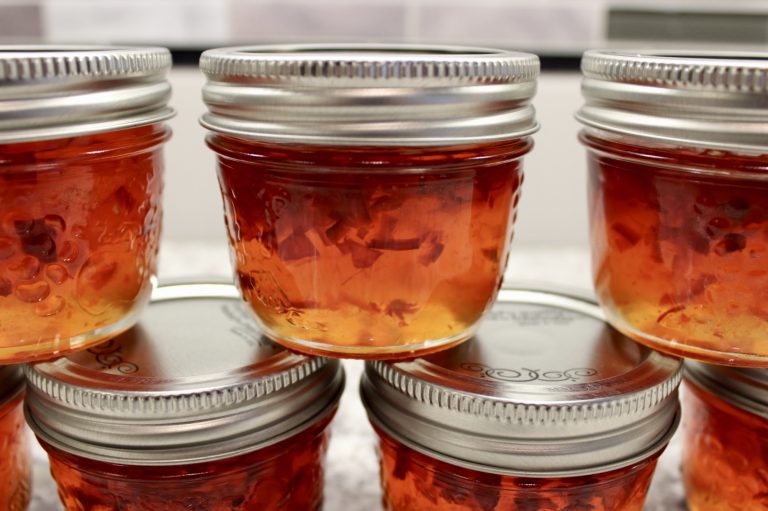 These make great hostess gifts. We do a lot of happy hours in our community and Hot Pepper Jelly is a popular addition to a cheese platter. Drop a spoonful over goat or cream cheese on a cracker, and this makes a delicious topping for warm Brie.

This Hot Pepper Jelly recipe makes about 15 small jars. If you make some with a friend it’s a perfect amount to share.

Spread some of this on a pork loin roast and sprinkle fresh chopped rosemary over top. Killer combination! 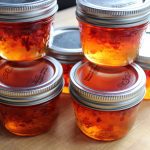