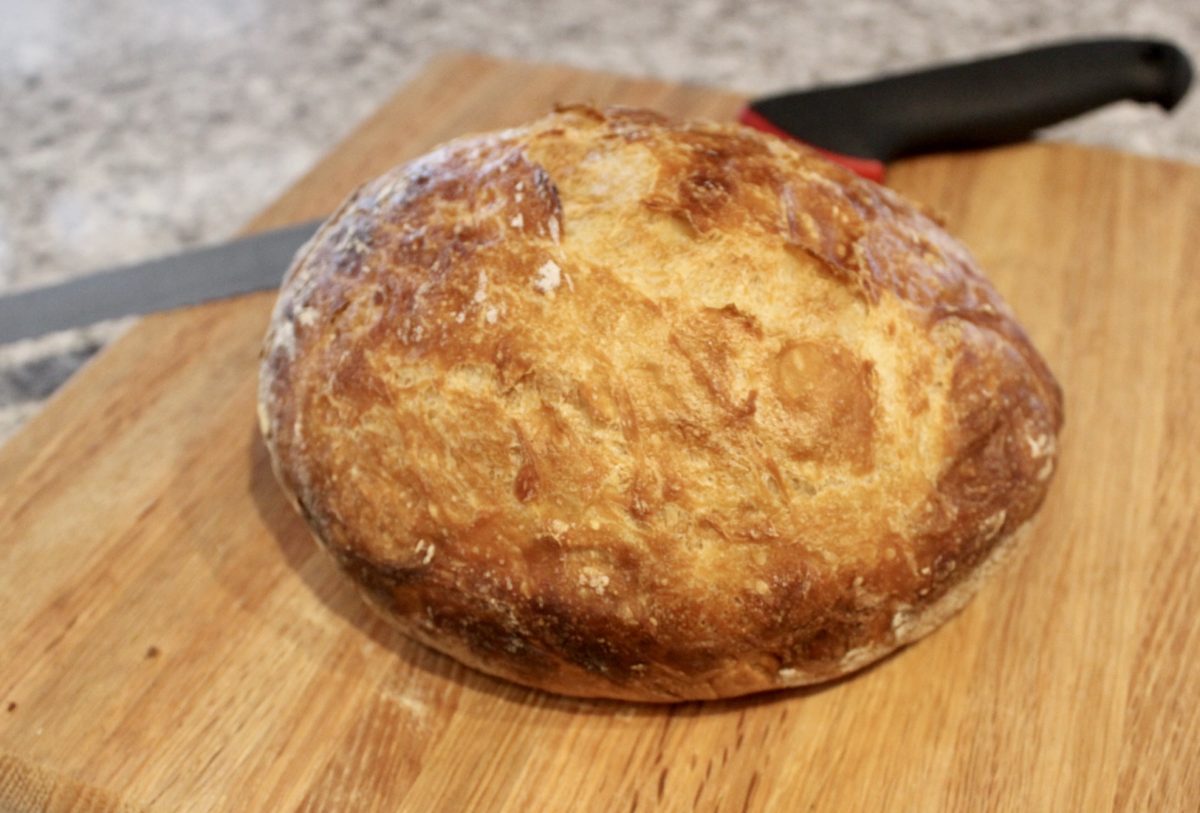 My friend Ann shared this recipe with me about 10 years ago. It originated from an article in the New York Times by Mark Bittman. The hardest part about making this easy no knead bread is waiting to eat it.

You mix up the ingredients then let it rise slowly for 12 to 20 hours. That’s quite a stretch. It uses very little yeast so it takes a long long time. If you search for this recipe you’ll find some variations in ingredient amounts, rising time and cooking time. In fact, the version of the recipe I have differs from the one on Mark’s website. I think it’s a very forgiving recipe so don’t stress over this one. You don’t even “knead” to proof the yeast! Get it? Knead? Sorry, I couldn’t help myself.

I just bought a new bag of flour and when I went to open it, a warning was printed on the top: Do Not Eat Raw Flour. Really? Because I was just about to pour myself a bowl. But seriously, this is a really simple homemade bread recipe.  A few people have mentioned that they love homemade bread but probably wouldn’t make it. However, this one is different! You don’t need any special equipment or baking skills. So go out and buy some yeast and get ready to make New York Times No Knead Bread. It’s rumoured that a child can make it, it’s that easy. So no more excuses.

So what’s the difference between letting it rise 12 or 20 hours? Well, from what I’ve found, nothing really. It comes down to when you want to bake the bread. The long range allows you to make it at night or the morning, bake it later in the day or earlier in the day. So I’ve done some of the homework for you. You’re welcome. 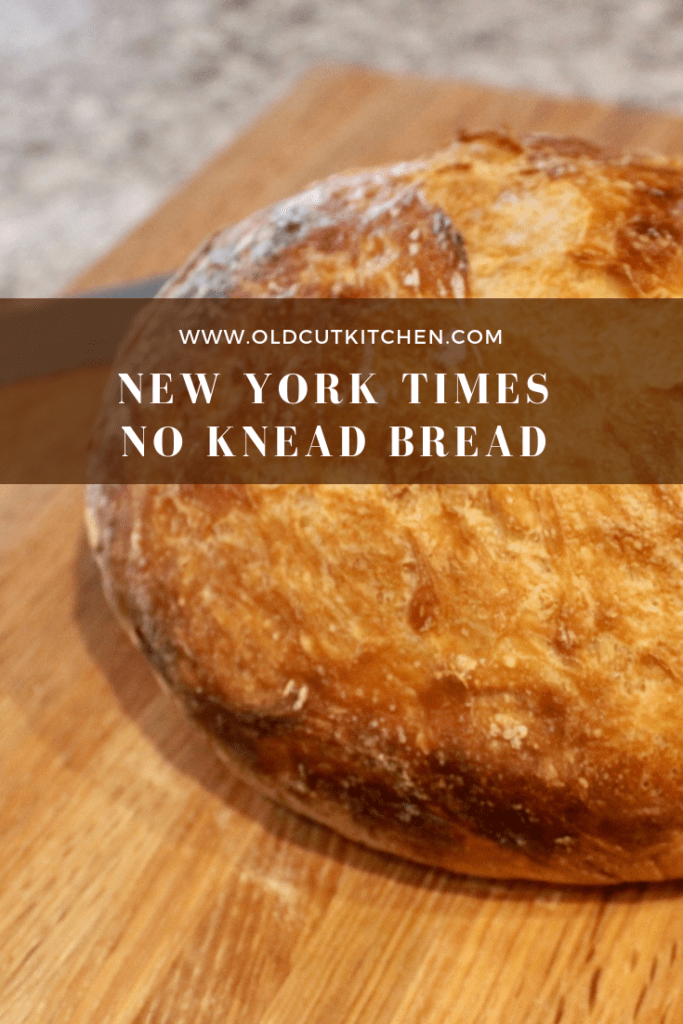 Start by mixing the flour, salt and yeast in a bowl. My recipe calls for 2 tsp of salt. Bread does need salt for flavour, however I found some versions of this recipe with less. Feel free to reduce but you do need a minimum of 1 tsp. 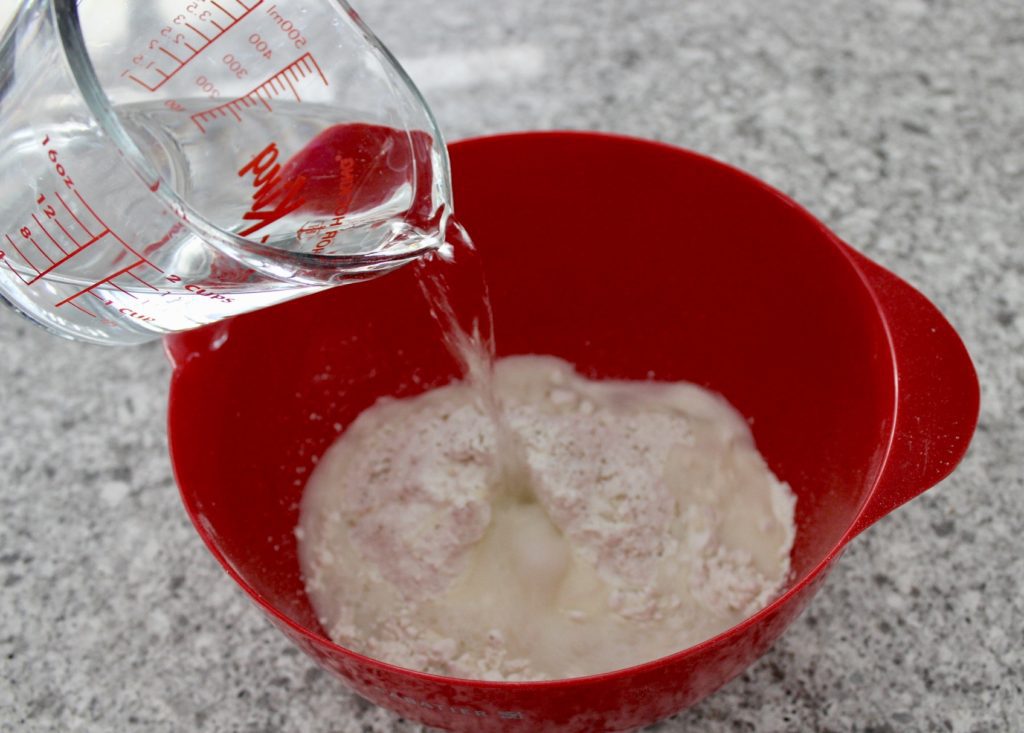 Pour warm water over top and mix. It’s quite a sticky dough at first. The temperature of the water isn’t as important if you’re proofing yeast for a kneaded dough but make sure it’s not too hot, just warm like bath water. 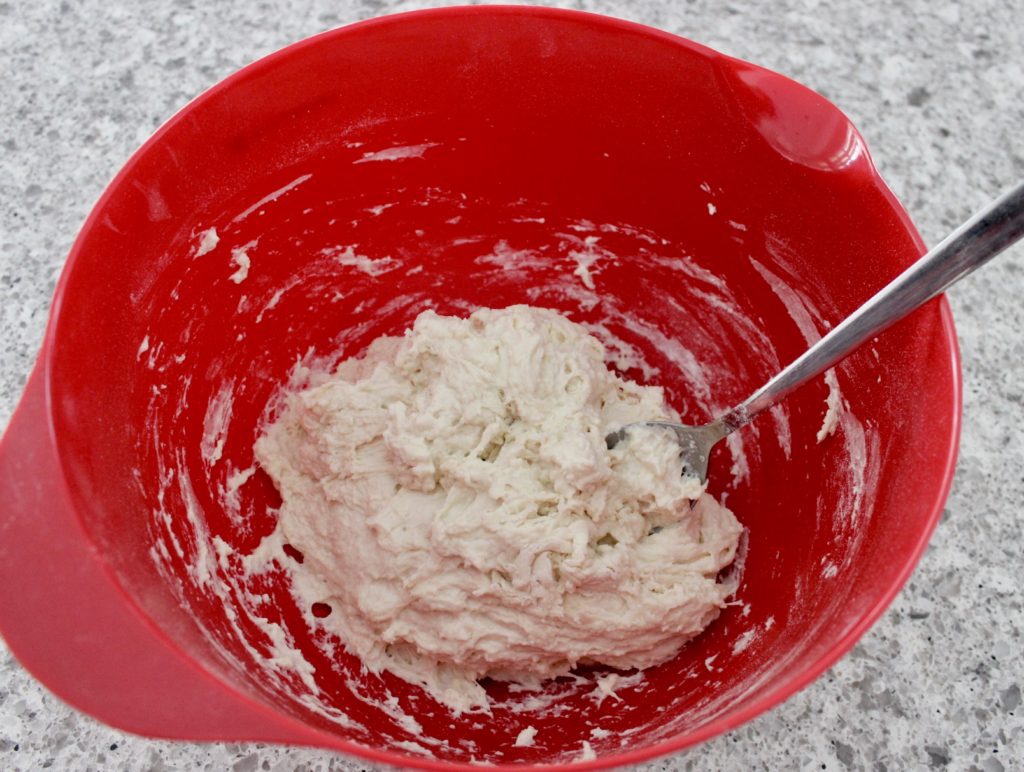 That’s it for now. Cover the bowl with plastic wrap and a towel. Leave it to rise somewhere it won’t get a draft. I did one on top of the fridge which has a bit of warmth too. The best place is in the microwave with the door closed. After at least 12 hours and up to 24 hours, it will have doubled in size and will be bubbly on top. This one was 20 hours. 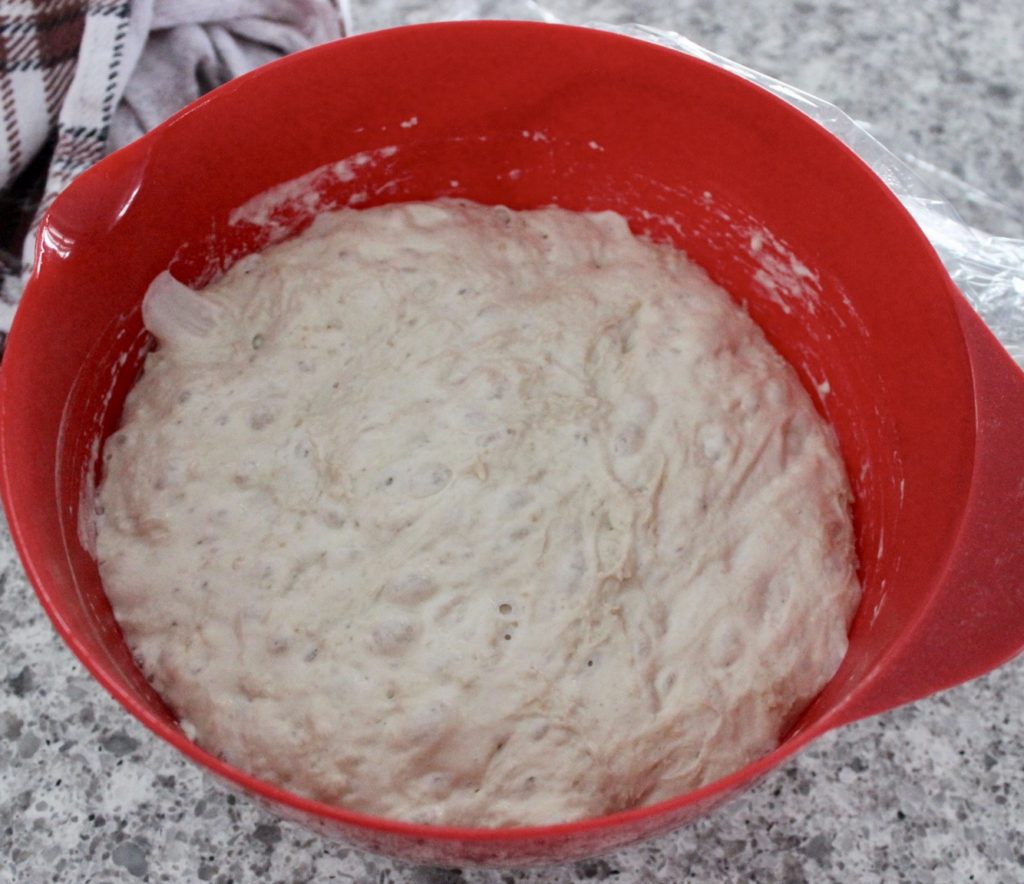 Then you give it a quick knead on a well floured surface, just press out the air bubbles and fold it over itself a few times, press down, turn repeat. It might squeak and pop and it will definitely stick to your fingers. Then shape it into a ball, dust lightly with flour, including underneath, then more waiting. Another 2 hours of rising. Even the 2 hours is flexible like the initial rising time. I’m going to say at least 2 hours. Hopefully it will double in size but if it doesn’t don’t worry, it will still rise in the oven. 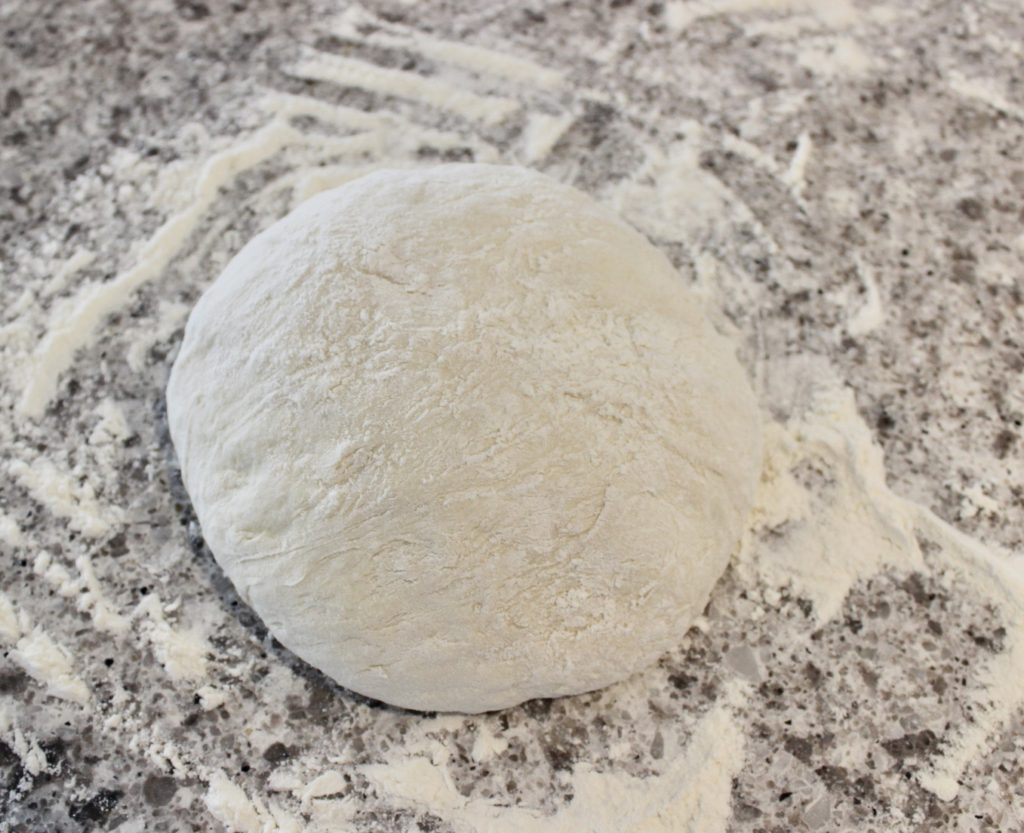 Once you’re ready to bake New York Times No Knead Bread, preheat the oven to 450 degrees. That’s a pretty hot oven but that’s what the recipe says. I tried baking a loaf at a lower temperature, 425 ish, hoping the bottom crust wasn’t as tough but it was still the same. You also need to preheat the pot you’re cooking the bread in. A heavy lidded pot like a dutch oven works best and it needs to be at least 3 Litres to give the bread room to rise. Put the pot in the oven while it preheats. Set your rack near the lowest setting. Don’t worry about preheating the lid. Then dump your dough in, cover and bake. After half an hour, remove the lid. 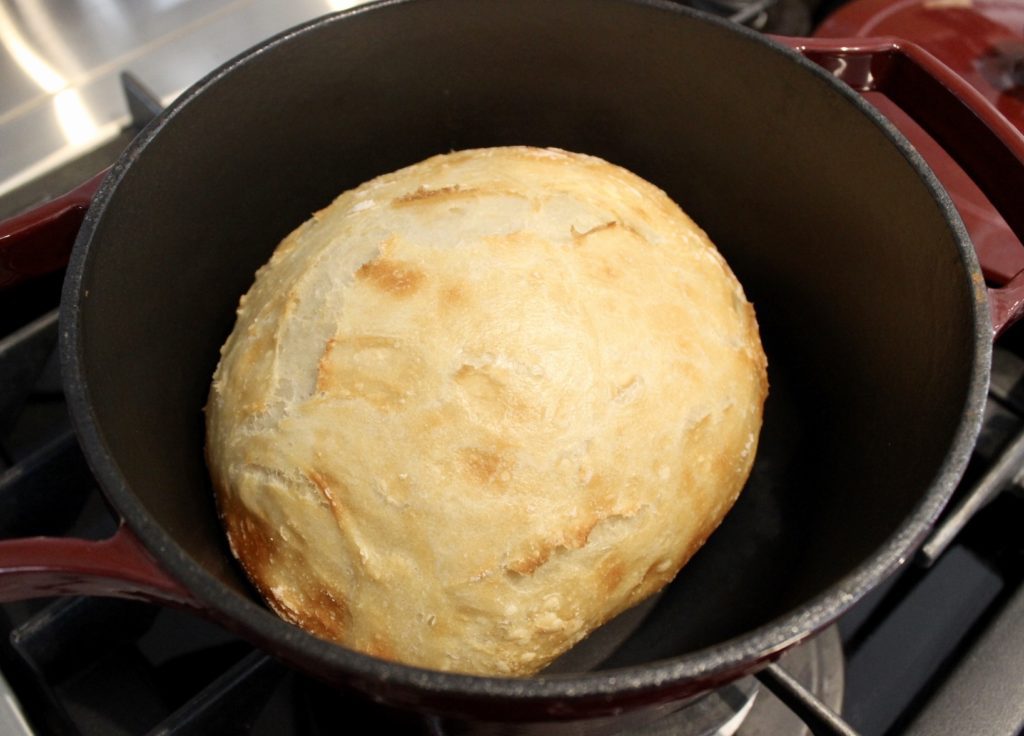 It should be risen fully and just starting to brown. Doesn’t this look beautiful? But it’s not quite done yet.

Bake it another 15 minutes or so without the lid on. Some versions of this recipe actually say up to 30 minutes but this heavy dutch oven really holds the heat and it was nice and brown with a good crust after 15 minutes which is what my hand written recipe said. Even the lower temperature version was done after 15 minutes. 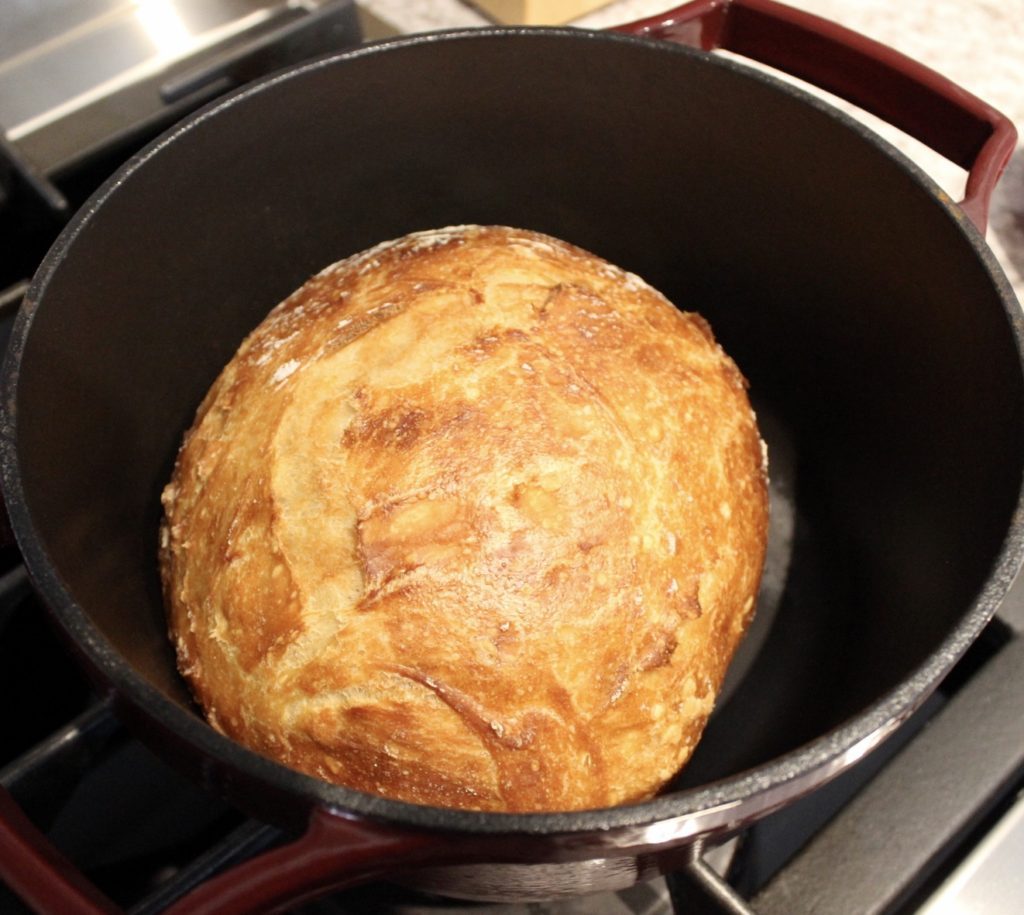 Then MORE waiting. Until it’s cool enough to slice. 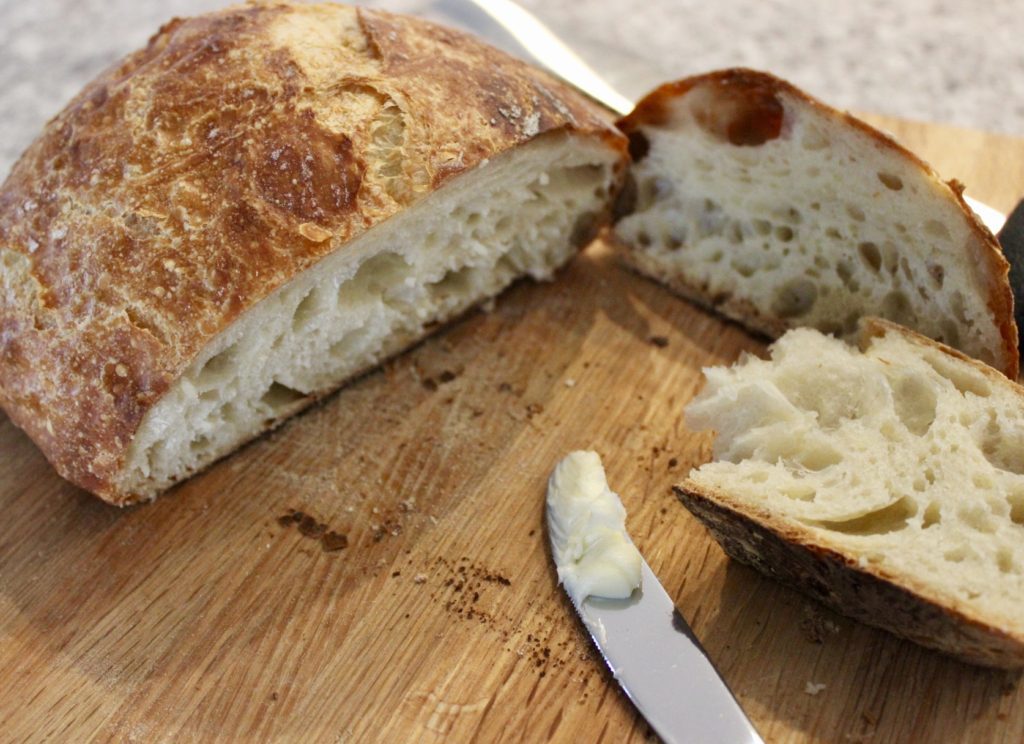 I’ve made some variations of this recipe by adding a few herbs, some chopped garlic, even some parmesan cheese and it always seems to come out great. In fact, I once made a loaf for our friend Scottie and he described it as “orgasm bread” so what does that tell you? I’d say he liked it.

The end result is a beautiful rustic round loaf. It isn’t the same texture as a typical kneaded yeast bread. The crust is quite tough and chewy and the interior has a fair amount of holes, similar to sourdough bread

Like all homemade bread, New York Times No Knead Bread only stays fresh for a day or two. That’s not usually a problem in our house because it won’t last that long anyway. But it makes great toast too.

Once you’ve mastered this, and since you have some leftover yeast anyway, why not try making Olive and Onion Bread or French Baguette ? 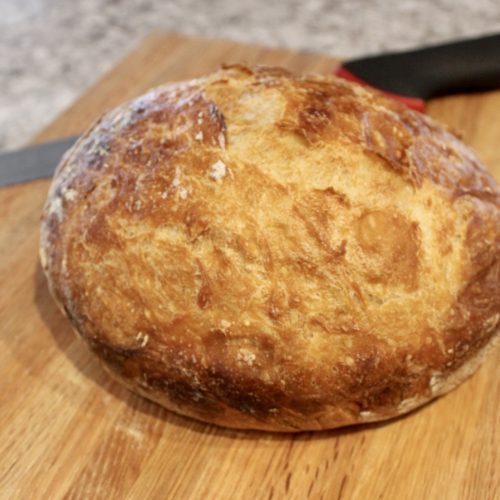 other easy bread recipes to try